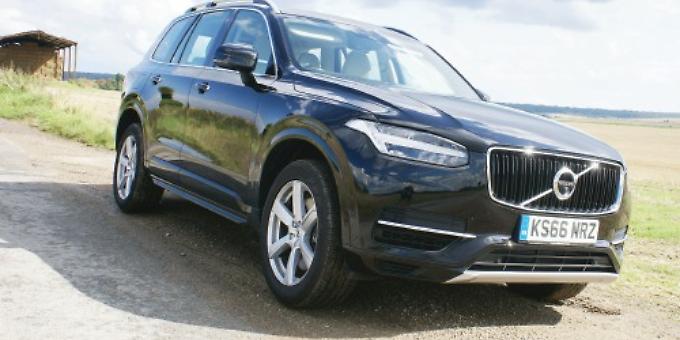 IT’S really rather wonderful how great writers have unwittingly provided us journalists with endless inspiration for clever headlines from their work.

Take HG Wells’s much vaunted —and liberally used — The Shape of Things to Come, written in 1933.

The title of that prescient sci-fi novel is perfect because this week’s drive epitomises the shape of things to come in cars.

That last sentence might be a dodgy premise on my part, for car development is changing so fast who knows where we will be in even two decades?

Wells, too, seemed to have been hedging his bets by predicting the future, in as much as his novel speculated on events as far ahead as 2116.

This summer we have seen one major car maker — Volvo — saying that from 2019 it will produce only
all-electric and plug-in hybrid and mild hybrid models.

The government chipped in with the news that by 2040 Britain will have banned petrol and diesel cars and vans.

This week’s drive then, the Volvo XC90 T8 Twin Engine Momentum, is the present shape of things to come in cars. It has to be the big daddy of plug-in hybrids, for it is a car of impressive all-round achievement.

This comes at a price, of course, more on which later.

In the meantime, the XC90 T8 has fantastic performance — 0-60mph in just 5.3 seconds with a top speed of 140 mph — and eats up motorway miles with consummate ease.

I have not been there, of course — 140 mph, that is — in this car, but the amazing build quality of the XC90 T8 instils the confidence needed to travel at such high speed in comfort and safety. This XC90 T8 in particular should allay fears that some motorists might have that they would not get driver satisfaction in a large
all-wheel-drive SUV (sport utility vehicle) if it were a plug-in hybrid.

For example those who like to tow caravans will be delighted to hear that the XC90 T8 I have been driving with Volvo’s most powerful Drive-E petrol engine together with an electric motor, recently won the first-ever best hybrid award at the Tow Car Awards.

The twin engine hybrid powertrain produces more than 400hp, so there is plenty of torque (pulling power) to draw on.

The seven-seat XC90 T8 (actually the car I have been testing) was praised for its excellent performance, its stability, handling and braking when towing, and for its practical boot.

The testers were also impressed with the amount of room the XC90 T8 offers — its hybrid batteries are stored between the front seats, so they don’t compromise the available cabin space, unlike in many hybrid cars.

David Motton, tow car editor of Practical Caravan magazine, said: “The XC90 T8 is up with the best we’ve tested. It is quick and roomy, with tremendous performance and is very practical.” The XC90 T8’s all-wheel-drive helps, of course, while the electric motor’s instant torque is particularly useful when manoeuvring at low speeds.

Unlike some hybrid vehicles that have a comparatively low towing limit, the T8 can handle up to 2,400 kg, which is enough to tow even large loads.

Every XC90 comes with an eight-speed automatic gearbox and all-wheel-drive as standard, along with hill start assist, hill descent control, satellite navigation with European mapping, and front and rear parking sensors.

It also comes with automatic emergency braking — including pedestrian, cyclist and large animal detection — and the Volvo On Call app, which allows you to control various functions of your car remotely.

On top of this, the T8 version has an auxiliary fuel-fired heater with pre-conditioning functions, so you can cool or warm the cabin before you get in the car, along with a panoramic sunroof and four-zone climate control.

The XC90 T8 can travel for up to 27 miles in electric-only mode when you’re not towing, and its batteries can be fully recharged in as little as two and a half hours.

One of the best things going for plug-in hybrids is that you have none of the “range anxiety” associated with pure electric vehicles.

I have experienced this “range anxiety” for myself and I think its existence is totally counterproductive to selling electric cars in Britain.

However, for short journeys, the all-electric car has a future: I am sure car makers are aware of this anxiety and working furiously to improve the range of electric vehicles. But for now, the plug-in hybrid seems the best option.

This XC90 T8 is really a super version of the plug-in models — probably one of the best you can get.

What you need is a dedicated charging point at home, together with adopting an intelligent way of driving to get the best from any plug-in hybrid.

However, the consumer ultimately is the one who has to decide if he or she wants to spend this kind of money on a car.

But I have no doubt that with its host of standard features and safety and technical innovations, this XC90 T8 is one of the most accomplished and impressive cars I have driven – a titan of a car heading up an age of rapid change.