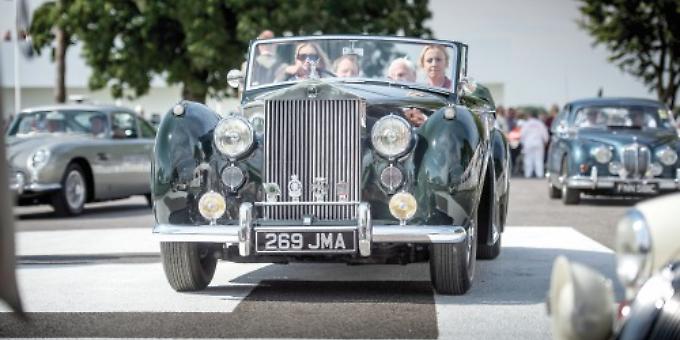 The centrepiece was the March Motor Works, this year renamed “Gordon Galleries”, echoing the shopping arcades of Fifties central London.

The galleries included a period Rolls-Royce showroom, recapturing the sights, sounds and atmosphere of the marque’s glamorous premises in the West End during the period.

Within the showroom, a stunning 1956 Rolls-Royce Silver Wraith Extended Wheelbase was displayed, with a body by Freestone & Webb.

Finished in black over red, the car was first presented at the 1956 British International Motor Show at Earl’s Court.

Rolls-Royce was represented on the motor circuit itself throughout the event by a handsome 1966 Rolls-Royce Phantom V Touring Limousine (PV 23 design), with a body by coachbuilder James Young.

Finished in ivory over black and one of very few made with Hooper rear windows, this splendid touring limousine formed part of the course director’s entourage giving invited guests an opportunity to experience the marque’s legendary “magic carpet ride” for themselves, in period luxury — if only marginally disturbed by the ticking of the original mechanical clock!

An exclusive fleet of contemporary Rolls-Royce motor cars was at Goodwood over the weekend, with guests being conveyed in luxury from the company’s manufacturing plant and head office on the south-eastern corner of the Goodwood Estate.