Engine's enough to make anyone into a Spider-fan! 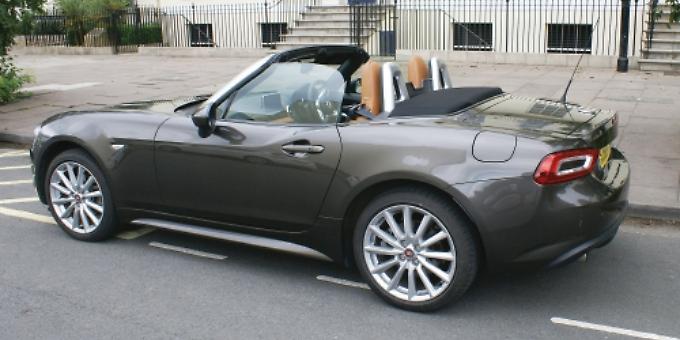 IT is a Japanese city chillingly symbolic of man’s capability to destroy — yet also somewhere in the 21st century where rebirth speaks volumes.

This is true certainly as far as the multi-billion-dollar world car manufacturing industry is concerned.

And here in this port city, two very up-to-the-minute sports cars that owe their DNA to classic British sports cars of old are produced.

The Mazda MX-5 — the latest version of which I reviewed recently in these pages — and the superb Fiat 124 Spider are manufactured virtually side by side.

To some the cars appear to be twins. Not identical, I’ll grant you — the badge is one distinguishing feature. But the cut of each of these cars’ particular jibs is remarkably similar.

Although the 124 Spider is based on the fourth generation MX-5 roadster and shares its platform, mechanics, interior and convertible roof mechanism, there is one big difference.

That is the engine, and there to my mind lies the secret of the 124 Spider’s amazing appeal.

I cannot tell you how much fun I have had this week driving the 124 Spider. Somehow its brilliantly engineered 140hp 1.4-litre MultiAir turbo petrol engine and its slick little gear change combine to produce great handling and performance.

With the constant traffic queues and disruptions on our roads and the sheer volume of cars and other vehicles around, there is a danger that even the most ardent of motoring fans could become a tad fed up with it all.

The Fiat 124 Spider certainly rejuvenated me as far as driving is concerned. With the top down, and the sun out (most of the time), I could not have been happier zipping along country lanes.

Even on the motorway, the car performed with Fiat’s customary zest.

I have owned several Fiats in my driving lifetime, including two of the smallest Fiat 500s, and without fail the engines have always proved willing and able.

This is not always the case with cars even today, where they have to be good to survive in a ruthless marketplace.

In some cars you find the balance between engine and body/handling can be wanting.

In the Fiat 124 Spider the balance seems right. And I like the very quick way of getting the hood up and down.

In the British sports cars of old from which the 124 Spider takes many of its cues, the hoods were frankly a bind.

On the cars I had there was no such thing as being able to quickly throw the hood back to enjoy a spot of open-top motoring.

On the 124 Spider I was able to both open the hood and close it literally within a few seconds without getting out of the car.

It takes a knack but once mastered I found I could quickly adjust the hood — very handy given our wonderful British weather!

Of course, the 2016 124 Spider has something to live up to, namely because some people compare the car to the original Pininfarina-designed Fiat 124 Sport Spider, which was produced from 1966 to 1985.

I guess that is understandable, in as much as the way train buffs niggle over the tiniest detail about railway rolling stock that was made a century ago.

Except that the Fiat 124 Sport Spider was undoubtedly a beauty, with lovely lines (particularly on the 1970 model year, as I recall).

However, despite a few grumbles from expected quarters about the new 124 Spider not being in the same league as its former illustrious self, I think Fiat has done a great job and I would seriously like to own one!

For most of us this is not beyond the realms of fantasy: unlike most sports cars today, the Fiat 124 Spider comes in at a bargain price range between £19,545 and £23,295.

And now for the techie bit — and the main reason the 124 Spider is so good to drive. The 1,368cc MultiAir, turbocharged four-cylinder engine delivers 140hp to the rear wheels via six-speed manual transmission and compact rear differential.

Handling is made muscular and effective by the car's suspension that uses a double-wishbone layout in front and a multilink in the rear, tuned for greater stability while braking and turning. The dual-pinion electric power steering system makes the car immediately responsive while cornering hard.

Equipment includes a voice-controlled infotainment system (with Bluetooth), LED rear light clusters, four airbags, TPMS, cruise control, a speed limiter and ESC with ABS and EBD as standard — as are seat belts with pre-tensioners to control the degree of force applied by the belt on to the occupant and then gradually release it in a controlled manner.

Where fitted, there is also a rear parking assistance system, a reversing camera, keyless entry and automatic lights and wipers.

Three trim levels are offered: Classica, Lusso and Lusso Plus. The level of standard equipment on the entry-level Classica version is high: a powerful infotainment system with USB, AUX and Bluetooth connectivity.

A seven-inch touchscreen infotainment system with DAB, WiFi, two USB ports and a multimedia control knob is available as a £500 option.

I reckon a test drive should send your driving pulse racing again.