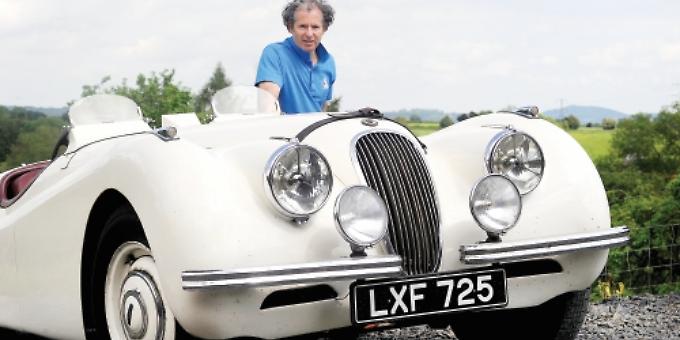 To mark the event, the XK Club is next June 9 and 10 staging an XK70 Jaguar Festival.

Based at the historic Shelsley Walsh Hill Climb in Worcestershire, this is expected to be one of the most spectacular Jaguar XK celebrations ever staged in the motoring world.

There will be a competitive speed hill climb, demonstration runs, the opportunity to take cars up the oldest racetrack in the world still in use, historic cars, 1948 party, forums, displays, personalities, dinners, live music and more.

“It is our intention to celebrate this landmark in suitable style,” said XK Club founder Philip Porter.

The XK engine powered the majority of Jaguars between 1950 and 1986 — including the Mark 2 saloons, E-types and the XJ6 saloons.

Not to mention tanks, armoured cars, fire engines and record-breaking power boats. For many, it is considered to be the greatest engine of all time. XK 120s were produced from 1948 until 1954 when they were succeeded by the XK 140, which was followed by the XK 150 in 1957, to be replaced by the E-type in 1961. Over 30,000 XKs were produced, with around 60 per cent of them being exported.

The XK engine was hugely successful in motor racing, taking the C-types and D-types to five Le Mans wins in the Fifties, so motor sport will be a strong theme at the XK70 festival.

The latest drivers to confirm their attendance at next year’s celebration event are Peter Sutcliffe, who very successfully raced a D-type and Lightweight E-type during the period, and the famous Le Mans duo of Peter Lumsden and Peter Sargent.

All three Peters were the last of an era when privateers could still go motor racing at the highest levels. Coming over from Finland will be Sami Klat, the research engineer who developed Peter Lumsden and Peter Sargent’s Low Drag Lightweight E which ran at Le Mans in 1964.

Appropriately, the car will also be at Shelsley — as will the owner, who is travelling over especially from New York.

All XK 120s, 140s and 150s are eligible, together with their derivatives the C-types and
D-types, plus XK-engined cars and all Jaguar sports cars.

“I know how successful XK60 was,” said Peter Sargent. “XK70 looks to be even better!”

Described by legendary Formula One commentator Murray Walker as “Mr Jaguar”, Porter has been writing award-winning Jaguar and other motoring books for 30 years and will have owned his historic XKs for 45 years in 2018.

Shelsley Walsh in Worcestershire, not far from the M5 motorway, is the oldest venue of motor sport in the world still in use. Set in beautiful countryside yet within easy reach, it is an ideal setting for XK70.

For more information on next year’s event, visit www.xk70.co.uk