Discovery demonstrates its pulling power Down Under 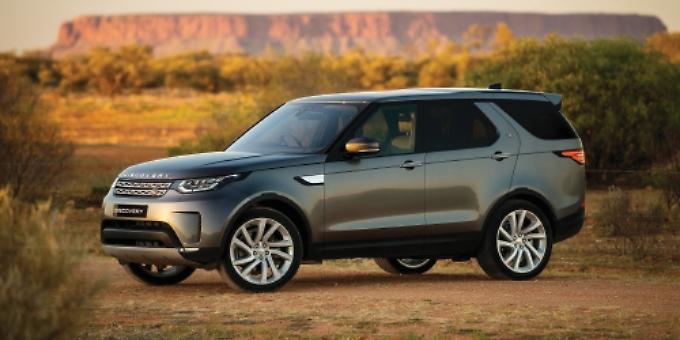 THE Land Rover Discovery has under its own steam towed a 110-tonne road train through the Australian Outback.

The giant seven-trailer truck being pulled by an SUV sounds far-fetched — but that’s exactly what happened when Land Rover put the Discovery to this telling towing test.

Land Rover staged the event in the remote Northern Territory to announce the arrival of the 2018 model year Discovery.

The Discovery Td6 with a 3.0-litre diesel engine and four-wheel-drive traction has a maximum certified towing capacity of 3,500kg on public roads yet successfully towed a 110-tonne road train 16km along a closed section of the Lasseter Highway.

Road trains of up to four trailers are only permitted in Australia’s vast Outback regions and typically carry fuel, mineral ore and cattle between remote rural communities. Strict regulations limit their length to 53.5 metres, but Land Rover had special permission to pull seven trailers and the 12-tonne tractor unit — retained to operate the hydraulic brakes fitted to the trailers.

John Bilato, managing director of haulage specialist G&S Transport, took the wheel for the epic tow. He said: “When Land Rover first got in touch, I didn’t think the vehicle would be able to do it, so I was amazed by how easily the standard Discovery pulled a 110-tonne road train. The smoothness of the gear changes under that amount of load was genuinely impressive.”

At its 1989 launch, the original Discovery I was used to pull a train and last year the Discovery Sport premium compact SUV towed a trio of rail carriages 85ft above the Rhine River.

Quentin Spottiswoode, Land Rover product engineer, said: “Towing capability has always been an important part of Discovery DNA and the raw weight of the road train tells only half the story here. Pulling a rig and seven trailers, with the rolling resistance of so many axles to overcome, is a huge achievement. We expected the vehicle to do well, but it passed this test with flying colours, hitting 44km/h along its 16km route.”

The Discovery used a standard eight-speed automatic transmission and four-wheel drive system and was hooked up to the road train using a factory-fitted tow bar attachment. The road train itself was even carrying 10 tonnes of ballast in order to hit the magic 110-tonne weight mark.

With 600Nm of torque (pulling power), the Td6 is well suited to pulling heavy loads. The 3.0-litre single-turbo engine features low-pressure exhaust recirculation and a two-stage oil pump for improved responses, refinement and efficiency. As a result, the diesel model delivers CO2 emissions of 189g/km and fuel economy of 39.2mpg (7.2l/100 km).

In addition, the Discovery gains new technologies including an Interactive Driver Display TFT instrument cluster. The state-of-the-art high-resolution panel provides contemporary graphics that create the impression of 3D surfaces with exceptional clarity and allows the driver to personalise the visual display around the two main dials.

All derivatives of the latest Discovery also feature Touch Pro infotainment with Jaguar Land Rover’s state-of-the-art 10-inch touchscreen interface on the centre console. Digital connectivity is enhanced with the introduction of 4G WiFi, providing superior connection speeds for up to eight mobile devices on the move.

Second-generation head-up display technology provides a full-colour display and wider functionality, even projecting 4x4 information and improved navigation displays on to the windscreen ahead of the driver, while Cabin Air Ionisation is available on Discovery for the first time, delivering improved interior air quality for enhanced passenger wellbeing.

The Discovery’s Advanced Tow Assist technology takes the stress out of reversing by providing responsive trajectory lines on the rear camera feed to the central touchscreen. This allows the driver to steer the vehicle using the rotary Terrain Response 2 controller on the centre console while the system calculates the steering inputs required to achieve the desired outcome.

⚫ Trailer Light Test — allows customers to test their trailer lights without outside assistance.

⚫ Rear Height Assist — allows the driver to lower and raise the height of the rear of the vehicle to making hitching a trailer simple.

⚫ Hitch Assist — guides the driver to the trailer hitch point by displaying trajectory lines on the touchscreen feed to simplify the process.

⚫ Trailer Stability Assist — enhances safety on the move by detecting trailer sway and reduces the speed of the vehicle to restore control to the driver.