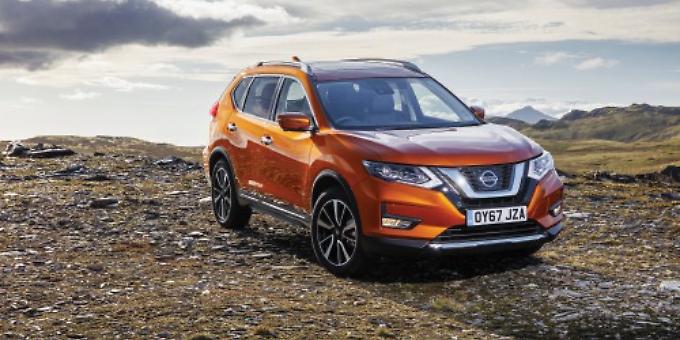 THE Nissan X-Trail is now available with a range of upgrades, which further enhance its quality and refinement.

The changes include a redesign of the exterior, a higher-quality interior with new features, additional practicality for owners and new technologies to make life on the road even safer.

And the new Nissan
X-Trail will be available with ProPILOT autonomous drive technology.

The X-Trail is number one for Nissan — it’s the brand’s best-selling vehicle worldwide.

Including the US, where the car is badged Rogue, more than 3.7 million have been sold since the first Nissan X-Trail was launched in 2000.

In January 2016, Nissan launched the car with a new 2.0-litre diesel engine.

The redesign makes much greater use of the X-Trail’s body colour, with the visible black plastic benefiting from a smart new gloss black finish.

On either side of the grille are new headlamp clusters, with much clearer design differentiation between the halogen units on Visia, Acenta and N-Connecta grades and full LEDs on Tekna. For models with full LED lamps, dipped beam now features Adaptive Front Lighting System (AFS). This means dynamic cornering lamps operating in conjunction with the vehicle’s speed and steering inputs.

Also appearing on the new Qashqai crossover, this is the first use of AFS for Nissan in Europe, and means greater illumination of a corner’s apex for better visibility and road safety. On high beam, the beam pattern is now wider than before, also improving visibility.

The front fog lamps are integrated into the new front bumper and have changed from a round shape to a rectangular one. They are standard from Acenta grade.

Also revised is the front parking sensors. Previously they were integrated into the bumper but did not sit completely flush to the surface. Now they are flush.

The cabin of the new Nissan X-Trail boasts a raft of upgrades to enhance the existing high-quality feel. The new steering wheel is now
D-shaped and the horizontal base means easier entry and exit for the driver, as well as providing a sportier look and feel.

The two highest grades of X-Trail have previously come with an electric tailgate as standard. This feature has been enhanced on new
X-Trail with the additional of hands-free functionality.

Customers with shopping bags or holding young children close by can now kick their foot under the centre of the car’s rear bumper to automatically activate the opening mechanism.

What’s more, the boot on the new X-Trail is larger than before. Tekna grade is now fitted with an all-new eight-speaker system as standard. Supplied by Bose, Nissan’s premium audio partner, it features two 25mm tweeters at the base of the windscreen, a 165mm woofer in each front door and a 130mm mid-range speaker in each rear door.

Two 115mm woofers are housed in a 7.7-litre custom-engineered enclosure mounted in the spare wheel well. A Bose digital amplifier with eight channels of custom equalisation and digital signal processing is mounted under the passenger seat (five-seat versions only).

Nissan will introduce ProPILOT on the new
X-Trail. It’s the first stage on the brand’s journey to autonomous driving, giving drivers more freedom by allowing them to automate the mundane elements of their motoring life. ProPILOT will control the steering, acceleration and braking in a single lane on highways during heavy traffic congestion and high-speed cruising.

It is based on three technologies — Lane Keep Assist (LKA), Intelligent Cruise Control (ICC) and Traffic Jam Pilot (TJP). Intuitive to use, ProPILOT will be activated via a button on the X-Trail’s steering wheel.