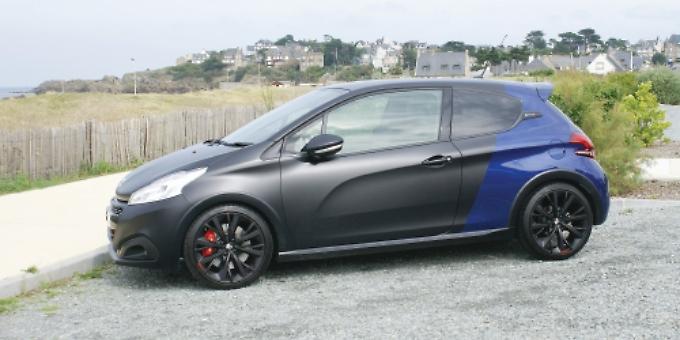 HAVE you ever had the strongest urge to drive and drive without seeing a soul, simply for the sheer pleasure of driving?

There is a place in Australia — Anna Creek Station, the largest cattle station in the world covering 9,400 square miles — where legend has it the owner has driven, presumably in splendid seclusion, for 100,000 miles without leaving home.

Back in the real world — for most of us, anyway — if you really want to drive you should go to Europe and enjoy those seemingly endless continental roads.

You can drive there to your heart’s content — Malaga in southern Spain, for example, from St Malo in Brittany, is a drive of more than 1,000 miles.

Our aim was far more modest when we landed recently at St Malo in a rather special car — the ubiquitous and brand new 2017 Peugeot 208 GTi, styled and designed by Peugeot Sport, for an all too brief holiday.

A fast hatchback might not be the car of choice for everyone embarking on a tour of northern Brittany, but this plucky, muscular little car acquitted itself well throughout. The irony is that one of the best drives I had in the Peugeot 208 GTi was when we returned to the UK.

An awful motorway snarl-up greeted us (surprise, surprise) after we left the ferry and forced us to seek an alternative route home, which involved a lot of quick country roads.

These proved an absolute pleasure to drive on in the 208 GTi until we were able to pick up on a motorway again. And there, too, the car’s great 1.6-litre petrol engine, producing 208hp, lapped up the miles with ease.

At an on-the-road price of around £23,000 this is huge value for money for a performance car.

Over the years I have driven in France in all sorts of cars — from huge 4x4s and people carriers to mid-size family saloons and estate cars. With just two people on board and minimal luggage, this sporty hatchback was just the job.

It has to be a truism that people often buy cars with interior space to spare that they actually never use. How many SUVs (sport utility vehicles), for instance, are ever used to their full potential, on- or off-road and with regard to what is usually a giant load space? Being one of the smaller cars on the ferry we also seemed to get priority treatment on loading, though that might have been my imagination.

I had the feeling that loading the Brittany Ferries’ Bretagne was an art form — small cars are tucked up first in available nooks and crannies.

For me, this is the best way for any motorist to prepare for a motoring journey you may be contemplating in Europe.

Brittany Ferries have upped their game considerably in recent years and what could be nicer for British drivers facing long drives on the continent than an evening boat from Portsmouth?

Waking up in St Malo, after dinner the night before in the on board restaurant and a good sleep in your own cabin, you feel refreshed and ready for driving.

Other ways might be quicker, but as I said at the beginning of this article you could be facing thousands of miles of driving through Europe so you need to be prepared in body and mind.

There are other alternative routes with Brittany Ferries that can take you to other points to start your motoring holiday through France, which I shall go into in my second article describing this trip.

As it happens, while staying in Dinard in Brittany our visit coincided with the 28th Festival du film brittanique — an homage to British film, in particular Hitchcock, whose statue looks out across the main promenade — which I shall expand upon next time. But for now, the car: I was not put off by the compact size of this punchy three-door hatchback. The Peugeot 208 GTi of course has fabulous antecedents.

The GTi badge has featured on performance versions since 1984. The 1.6 litre 205 GTI was launched in 1984. The 205 is still often treated as a benchmark in group car tests of the newest GTI models or equivalent.

The 205 car itself became a sort of “badge of honour” for any self-respecting motorist who had the audacity to be described as a GTi owner.

But times have changed and this new 2017 model 208 GTi is as you would expect a much more sophisticated beast.

It was remarkably comfortable for touring northern Brittany, though on some roads its specific shock absorbers, springs, wheel alignment and 18in lithium matt black alloy wheels added up to a stiff ride.

But there you go: if you want the performance and glue-like road adhesion while cornering quickly, then you need the right equipment. This car goes from 0-62mph in 6.5 seconds and could go on to top 140mph.

Right down to the Peugeot 208 GTi’s plush red carpets and its fetching livery — Coupe France Paint in blue/black, fitted at an extra cost of £945 — and its black Alcantara trim, this car still has the capacity to provide thrills for the driver — something that should perhaps be cherished in an age of burgeoning automation in cars.

Options fitted at extra cost include: