Lap up miles in luxury 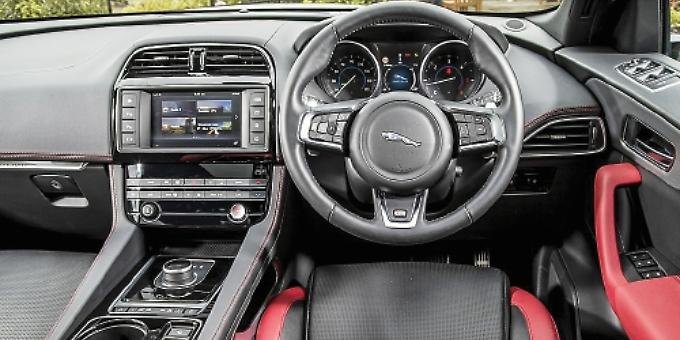 FROM its well-fettered interior to its guttural, determined engine, the Jaguar F-Pace is one of the big SUV beasts of the car jungle.

This feels like a big car in every sense with a broad back and shoulders: yet most of the time the F-Pace’s turbocharged two-litre diesel engine purrs along rather than growls.

This makes for contented driving in an interior that would not be out of place in a five-star hotel.

The Latte Windsor leather seats are sumptuous and impressively made; the instrumentation and technology is up-to-the-minute; the on-board entertainment system will keep you happy as this big cat laps up the miles.

And yet the more you drive the F-Pace the more you become convinced that this handsome SUV (sports utility vehicle) has a distinctly enigmatic quality about it.

I found myself asking the kind of questions those smart marketing persons ask: what is our target market for the F-Pace? Who is expected to buy it? The answer could be simple: people who love Jaguars and all that legend represents.

Some cars have a defined role in life: the punchy little hatchback knows its place; the sports car has to think of itself as being suave and a bit cool.

So having been put in an Obama-like, ultra laid-back state by the sheer seductiveness of this car, I reckon I notched up around 500 miles of relaxed rejuvenation (rather like one might experience in a top-notch hotel spa).

The 10-way electric front seats could be tuned (and saved on a memory button) to suit both front seat passengers’ most particular lumbar needs. The two-zone climate control could be tuned to make your comfort zone even more comfortable; and — bless ‘em at Jaguar — there was a CD player and super sound from a Meridian Sound System (380W) to bathe you in music or the dulcet tones of Martha Kearney on Radio 4’s The World at One.

What more could you want from a car? Well, on the F-Pace there was a lot more. Just to choose a few: Xenon headlights with LED Blade daytime running lights; premium carpet mats; auto-dimming power fold heated door mirrors; InControl apps, WIFI and touch navigation; and a powered tailgate, to name a few items that come as “standard specification”.

Of course there is a price for all this comfort and joy: the basic price of £47,115 would have got you started on the test car.

But hold on, there was even more. If you would like to splash some more cash to make this car even better you can have options such as Navigation Pro with Meridian surround system (825W) at £2,140; 10in dual-view touchscreen (£625); adaptive cruise control with queue assist and intelligent emergency braking (£1,460); advance parking assist pack with surround camera (£1,930) – the camera of which is a wonder to behold; and a memory pack for 14-way seats (£880). Well, you can see how things add up. But in my experience, if you put all that together (and myriad other goodies available as standard and options on the F-Pace) the final price of the test car — a few bob north of £63,000 — makes for a grand luxury car at, by today’s standards, a moderately high price.

This car was greeted enthusiastically when it first appeared. Indeed, the car was crowned a double World Car of the Year winner in New York.

As well as becoming the fastest-selling Jaguar ever, the F-Pace has collected more than 40 awards.

At the time the world car awards were given Ian Callum, Jaguar’s director of design said that the F-Pace was the carmaker’s first-ever SUV and that it was “clearly recognisable as a Jaguar”.

That says it all to me about this car. For Jaguar lovers the world over, who love the brand simply because of its antecedents and that fact it bears that name, the F-Pace is a car to cherish in a rapidly changing world.