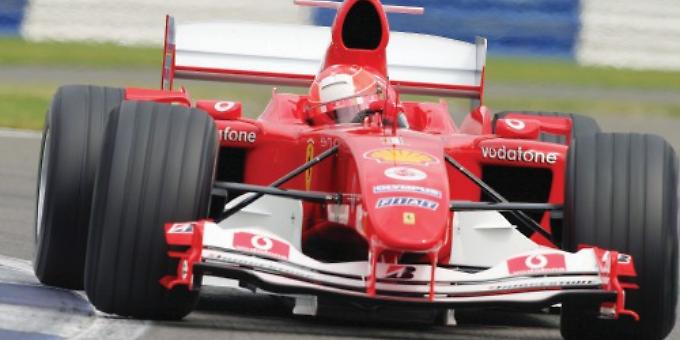 NOW here’s a must-see occasion for your 2018 diary. One of the most fabulous Ferraris in Formula One motor racing history is coming to a show in Birmingham.

The Ferrari F2004 — one of the most dominant cars in Formula One history — will take pride of place at Europe’s biggest pre-season motorsport show, Autosport International.

The event is being held at the National Exhibition Centre (NEC) Birmingham, from Thursday, January 11, to Sunday, January 14.

The legendary driver also won a single-season record of 13 races, breaking his own record of 11, as Ferrari collected the constructors’ championship with ease.

The F2004 still holds the lap record at seven circuits around the world — including five of the tracks still used in F1 today.

It also won 12 pole positions between the successful driving pairing of Rubens Barrichello and Michael Schumacher.

Its 3.0-litre V10 engine was capable of producing close to a mind-boggling 1,000bhp. Ross Brawn, Rory Byrne and Aldo Costa made changes to the design at the rear of the car.

The rear wing was made larger, the rear suspension was redesigned to reduce excessive tyre wear and the exhausts were made smaller, all for better aerodynamic performance.

The car joins the Ferrari FXX-K Evo, Ferrari 488 Challenge and a 488 GTE on the main Ferrari stand.

Autosport Media UK editor-in-chief, Andrew van de Burgt, said: “The Ferrari F2004 is one of the most iconic Formula One cars in the sport’s history. It was the car with which Michael Schumacher won his record-breaking seventh title and is a beautiful machine with an exceptional history. The Ferrari feature is already set to be a fantastic spectacle for visitors to the show, so make sure you don’t miss out on this amazing celebration of the ultimate motorsport marque.”

For full details and to book tickets, visit www.autosportinternational.com