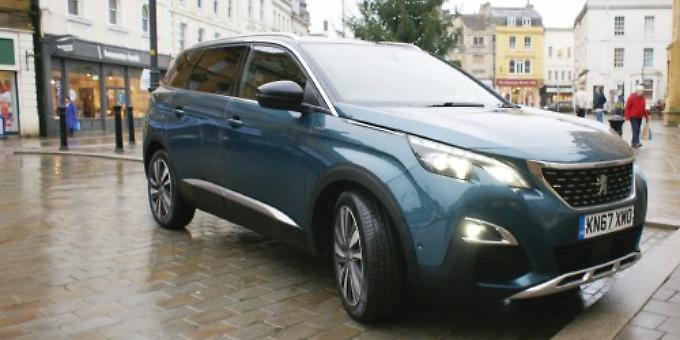 CHRISTMAS in the Cotswolds — especially throughout the Slad Valley of Laurie Lee’s memorable childhood — can look and feel magical, particularly at this time of the year.

So there could not be a better time or place to celebrate, in a modest way, of course, the Henley Standard’s Car of the Year 2017 — which goes to the all-new Peugeot 5008 SUV (sport utility vehicle).

There is sound reasoning for choosing the 5008 SUV for this accolade. Not least of which is the fact that Peugeot, of all the big European car makers, rarely stops innovating these days. And I like that outlook a lot.

While some car makers mark time, Peugeot — particularly with the 5008 SUV — has grasped the nettle of the need in the 21st century constantly to move forwards, bringing new features and technical must-haves to the fore.

Car makers should take a lesson from those frantic facilitators of mobile phones the world over: keep looking for the new and deliver it to a gagging public — particularly those young buyers whose appetite knows no bounds.

Not only does the 5008 SUV take inner-cabin comfort to another level usually experienced in SUVs that cost far more, the 5008 test car I have been driving came in at under £32,000.

Now I know I made something of this issue of overall cost of a new, large luxury SUVs in a recent column.

But it is worth returning to for a moment. There are those willing and able to pay upwards of £70,000 for a luxury SUV (actually that has to be around the minimum you might pay). And that is all well and good.

No one should dictate to anyone else how much you should or should not pay for a car. Time and again, I am reminded that you cannot second-guess new car buyers on their likes and dislikes.

But we all look for value for money these days, don’t we? Even those with deep pockets.

So my car of the year, the 5008 SUV, scores highly on value for money but also on the following main points: comfort, economy, handling and performance, great interior space and, last but not least, style.

One of the things I like most is the latest digital version of the Peugeot
i-Cockpit. I think this feature just about tops the lot and goes a good way to earning our accolade.

You feel as if you are in complete control of everything that goes on around the dashboard in front of you.

The i-Cockpit feature comprises a compact steering wheel (the smallest on the market, across all segments), an 8in capacitive touchscreen, and a huge 12.3in high-resolution digital head-up instrument panel.

The latter offers graphics, animations, and transitions between driving modes that drivers can customise and configure.

The touchscreen puts all the information drivers need for a comfortable trip at their fingertips.

GT Line (the model I have been driving) and GT versions also feature an extra button, next to the dashboard switches, to take things up a notch.

It may be that you do not feel ready for such sophistication in a car, but once you experience these features the impression is that together they make driving more comfortable, safer and enjoyable.

Other features that stand out are the petrol and diesel engines available. The test car was powered by a four-cylinder 1,997cc diesel engine that had plenty of torque (pulling power).

I also liked the six-speed manual gearbox on this car, which somewhat surprised me as these days I usually prefer an automatic box with larger SUVs.

Other good things: advanced grip control bolsters traction through five grip modes (normal, snow, mud, sand, ESP off) selected using a dial on the central console. This is backed up by 18in mud and snow (all-season) tyres.

Hill Assist Descent Control (HADC), activated by a button on the central console, takes the vehicle safely down steep gradients.

Ultrasonic sensors on the sides of the vehicle allow Park Assist to play a more active role in parking.

In Peugeot Smartbeam Assistance a camera at the top of the windscreen analyses detected light sources. It switches automatically between full and dipped beams according to traffic and lighting conditions.

One turn of the steering wheel dial switches the navigation system output from the 8in capacitive touchscreen to the 12.3in high-resolution digital head-up instrument panel for easier reading.

The TomTom traffic interface means having essential driving information in real time: local weather, the locations of nearby car parks and service stations, and even optional (subscription-based) display of TomTom transient or permanent high-risk zones based on reliable reports by the user community.

Peugeot engineers in 2012 set themselves the ambitious task of releasing five new SUVs in under a year.

So don’t expect this French car maker to rest on its laurels. The demand for the new in 2018 will be as acute as ever.

Options fitted at extra cost include: