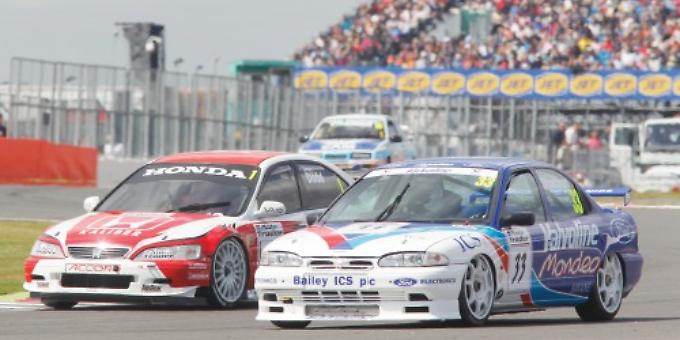 This year’s Silverstone Classic, which runs from July 20 to 22, will mark the 60th anniversary of one of Britain’s most enduring race series — the MSA British Touring Car Championship — with its biggest-ever homage to racing saloon cars.

First up is “Tin Top Sunday”. Staged only once before in 2016, this year’s event will feature four races for iconic BTCC cars from bygone eras.

Close to 200 of the BTCC’s illustrious machines will be reliving their glory years on the Silverstone Grand Prix circuit, with many being raced by past and present BTCC legends.

Turning the clock back to the early Sixties, the Under two-litre Touring Cars (U2TC) grid will feature Alfa Romeo GTAs, BMW TiSAs, Lotus Cortinas and hordes of Mini Coopers.

While early racing seasons were dominated by sporty versions of locally produced European saloons, by the mid-Sixties, American V8 muscle cars had come, seen and conquered.

This will be represented on the July 22 “Tin Top Sunday” bill by the return of the Trans-Atlantic Touring Car Trophy, where fans can look forward to a grid laden with Mustangs, Galaxies and Falcons.

By the mid-Seventies, the grids were filled with Capris, Rover Vitesses and smaller speedsters such as the Triumph Dolomite Sprint, Alfa Romeo GTV and BMW M3. All these cars are included in the Historic Touring Car Challenge (HTCC), which makes a return to this classic roster after its debut in 2016.

Completing the BTCC diamond jubilee story will be double-header rounds of the JET Super Touring Car Trophy, putting the spotlight on the high-tech tourers from the Nineties when, for many, saloon car racing reached its zenith.

“These four evocative grids on Tin Top Sunday will be a wonderful tribute to 60 memorable years of great fender-bending BTCC action,” said Nick Wigley, the CEO of Goose Live Events which organises the Silverstone Classic. “The BTCC boasts an incredible history of thrills and spills stretching right back to 1958 and in its diamond anniversary year we are excited to be celebrating its unrivalled provenance both on and off the track at this summer’s very special Classic.”

Adding further to the celebrations, past and present BTCC star drivers will be making an appearance. Many touring car aces have become regular competitors at the Silverstone festival and fans can expect a bumper turnout in 2018.

Fans wishing to join the diamond jubilee party must buy their tickets in advance. Those purchasing before March 31 can take advantage of a range of early bird offers, with adult admission starting from £37. All advance tickets will give access to both Silverstone racing paddocks, all open trackside grandstands, live music concerts on Friday and Saturday evenings, air shows, funfair rides and the vast majority of the family entertainment on offer.

For more information, including full details of all 2018 ticket prices, visit www.silverstoneclassic.com