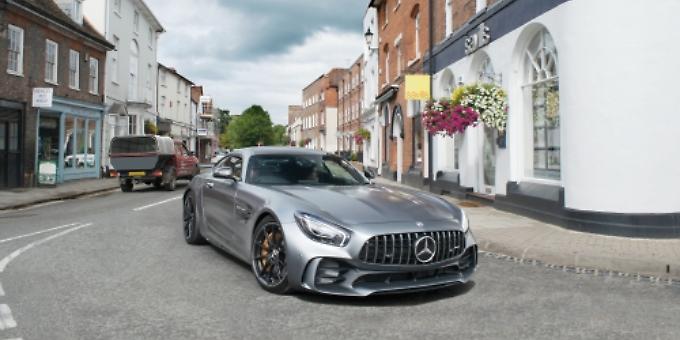 Motoring fan BEN STODOLNIC, a pupil at Langtree School in Woodcote, loves to spot supercars on our roads. You can find him on Instagram and YouTube at @mysupercarjourney

WITH sky-rocketing performance and a hair-raising appearance, this Mercedes-AMG GT R recently rode casually through the streets of Henley.

First unveiled at the Goodwood Festival of Speed in June 2016, this supercar boasts a top speed of 198mph and a 0-62mph time of just 3.6 seconds.

At a first glance, one may notice that the car’s design is classy, yet menacing. According to Mercedes themselves, the supercar “carries all the hallmarks of AMG innovation and styling”.

This specific car, which is finished in “Selenite Grey”, features high-sheen black forged alloy wheels, adding £500 to the price. Another distinctive feature of the GT R, as opposed to the standard GT, is the presence of a rear static aerofoil, giving favourable downforce at high speeds.

This car is often compared to the also newly-released Porsche 911 GT3, with which it shares a similar performance profile.

The Porsche is 200kg lighter, can accelerate to 62mph in just 3.4 seconds and has a similar top speed of 197mph. The Mercedes, however, can produce 585bhp — 92 more horsepower than the GT3.

But this extra 92 horsepower comes at a cost — a pretty hefty one at that.

Both uphold a similar overall performance, but at rather dissimilar prices.

Whatever the decision may be, one thing is for certain: it has been a pleasure for Henley to play host to such a marvel of German engineering.