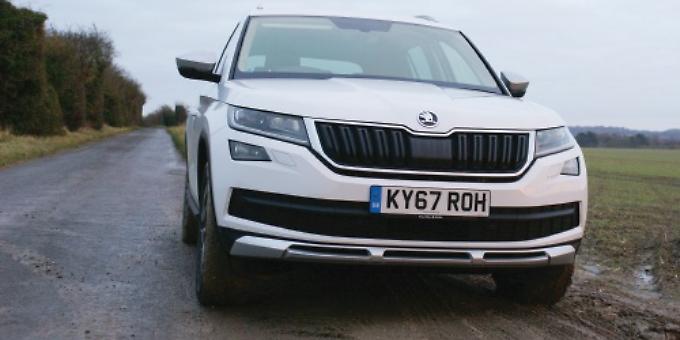 DRIVING the Scout version of Škoda’s new Kodiaq SUV over the Christmas break has restored my faith in this forward-looking car manufacturer.

But why? Because the Scout version, which was hotly anticipated, delivers for me that bit extra that makes it stand out in the many versions — there were 24 different variants available at launch — of this prestigious new SUV (sport utility vehicle).

Like other Škoda Scout models, the Kodiaq Scout comes with special features that give it an edge over other models in the range.

And for me this higher specification makes all the difference and transforms this SUV from the practical to the extraordinary.

Inside, the Kodiaq Scout features Alcantara trimmed seats and door panels, along with wood finish dashboard and door inserts and a Scout plaque on the dashboard.

Equipped with seven seats as standard, the Scout cabin also features aluminium trimmed pedals and LED ambient lighting. All models are equipped with an off-road mode that adapts the chassis, engine and brake settings for rough terrain.

It also engages Hill Descent Assist on steep downhill slopes, holding the car at a safe speed while it’s descending.

No wonder then that Kodiaq has added to its collection of industry awards a new title: Top Gear magazine’s Family SUV of the Year.

The car had already been crowned one of the magazine’s Best Cars in the World in 2016. So my recommendation to you is seriously to consider the Scout version of the Kodiaq if you are thinking of buying a large SUV (an option made all the more pertinent by recent early winter snowfalls).

Scout models have been part of Škoda’s range since the first Octavia Scout joined the range in 2007.

Characterised by their rugged design and enhanced off-road ability, Scout models have won numerous industry awards and Škoda says they enjoy a loyal following with buyers.

The Kodiaq is Škoda’s first seven-seater of the 21st century, and the brand’s first foray into the large SUV sector.

Prices start from £22,190, which is a good starting point for any large SUV.

However, as I am always saying, it is well worth your while considering going for a particular model specification that suits your driving.

I really like the DSG automatic transmission on the test car because it makes great sense to have a smooth auto gear change on these large SUVs.

That of course may not be to everyone’s taste and there are those that still like to grapple with a gearstick even in big vehicles.

Priced from £32,330 and positioned between the SE L and Edition models, the Scout is the first new addition to the Kodiaq range since the seven-seater SUV first came to the UK. The Scout is available with six engine and transmission options — all of which feature four-wheel drive.

Customers opting for diesel can choose between two 2.0 TDI units with outputs of 150PS and 190PS. The 150PS version offers the choice of a standard six-speed manual gearbox or a seven-speed DSG, while the range-topping 190PS version is equipped with a seven-speed DSG as standard.