All you want from an SUV, times 10 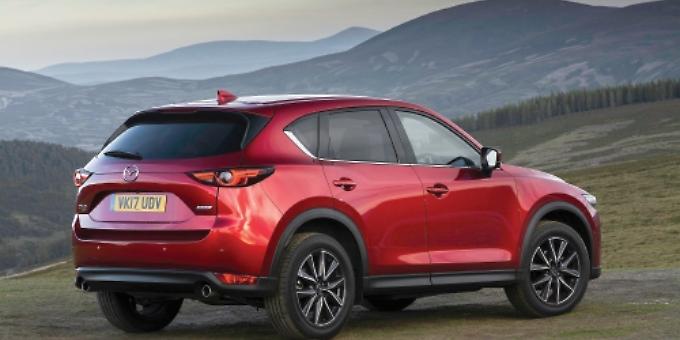 CONTINUING a theme I have touched on recently about the
re-emergence of medium to large SUVs as a viable vehicle for modern, 21st century driving, this week I have been at the wheel of the all-new Mazda CX-5.

And I have to say this car exemplifies just the kind of new, affordable, large and luxurious SUV (sport utility vehicle) any motorist would wish for.

It is quite extraordinary how good this car is. It scores highly on comfort, driveability, equipment, safety — and all in a price range that will not make your eyes pop.

Not only that but the residual value of this car is bound to be good and competitive, as the CX-5 has already proved by taking a top award from What Car? magazine.

Now in truth you may not have considered yourself a Mazda fan in the past, because allegiances to car marques are notoriously partisan.

But I would go so far as to say that if you were looking to buy a medium to large SUV in future then you would be neglectful not to try this new 2018 CX-5.

My enthusiasm no doubt stems from the fact that you can get just about everything you might need from an SUV from the CX-5 — from looks and style to those little added comforts that I now appreciate such as a heated steering wheel in a package that will not cost the earth.

The trick for the buyer is to get the right spec of car — and with 10 models of the CX-5 to choose from you need some time to decide which one would be right for you.

Consider for a moment, the record of this car so far. Available in two highly-specified trim levels, the 10-model UK range starts at £23,995.

Launched in 2012, the original Mazda CX-5 compact SUV clocked up global sales of more than 1.5 million and accounted for roughly 25 per cent of Mazda’s world sales volume. More than 32,000 CX-5s were sold in Britain.

Then last year the all-new CX-5 was launched again to acclaim. And you can see why when you drive it.

The CX-5 performs extraordinarily well. I have been driving the CX-5 2.2D 150ps Sport Nav 2wd.

The car had excellent torque (pulling power) both on country roads and on the motorway, which it took in its considerable stride. It was economical, too — recording around 56mpg on the combined cycle. This is good economy for a vehicle of this size by any standard.

The used car aspect should not be ignored. Alex Robbins, What Car? magazine’s used car editor, said of the CX-5: “There’s its fuel economy, which is usually impressive in the real world no matter which engine you choose. Throw in the CX-5’s affordability and its impressive scores in our reliability survey, and you have a resounding winner.”

Now it looks very much as if the all-new 2018 model will follow the original CX-5 in terms of impact on the market.

Jeremy Thomson, managing director of Mazda UK, said: “The original CX-5 will go down as a landmark car in Mazda’s history. The all-new Mazda CX-5 takes this to the next stage, elevating exterior design, cabin quality and refinement to new levels of sophistication whilst at the same time ensuring Mazda’s love of driving is even more apparent in the handling.” All models feature a standard equipment tally that includes LED headlights, auto power-folding door mirrors, dual-zone climate control, DAB radio and a seven-inch colour touchscreen display complete with Mazda’s integrated navigation.

Offered in a Mazda for the first time, Sport Nav models also feature a power lift tailgate, plus a new head-up display (HUD) that projects directly on to the windscreen and features traffic sign recognition.

• Available in two trim levels, there is a 10-model UK range

• 2.2-litre 150ps SKYACTIV-D diesel available with front-wheel drive and all-wheel drive transmissions, plus a choice of SKYACTIV-MT or SKYACTIV-Drive gearbox