'Stonic boom' is sound of Kia going for broke 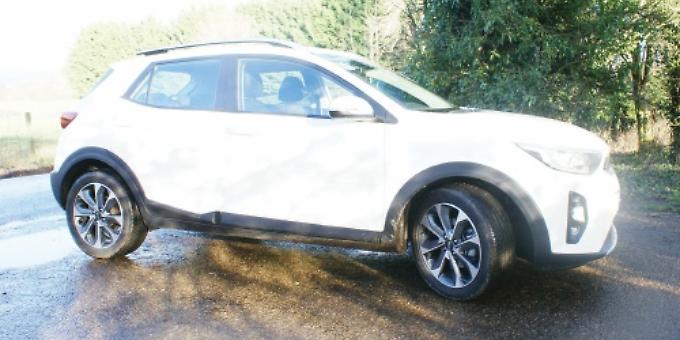 THE Kia Stonic boom heard across Britain heralds an unequivocal push for sales here in 2018 by the South Korean car maker.

Undeterred by industry reports of new car sales dropping off towards the end of 2017, Kia has come out fighting in the New Year.

The all-new Stonic was launched last year but coming up from Kia in 2018 is a line-up of new and improved models.

They include a “more frugal Stinger” — a 2.0 turbo petrol version of the car maker’s new sports saloon and a new Kia Sorento SUV (sport utility vehicle).

I went to the Kia Stonic launch and this week have had another opportunity to drive this model — this time a Kia Stonic 1.6 CRDi 2.

So what do you get for your money with the Stonic and why choose this car above other alternative models in the £16,000 to £20,000 price bracket?

This rapidly expanding small SUV market may be the coming thing — and one the Stonic joins with confidence — but is it for you?

What you get with the Stonic is a well-produced, good-sized, economic motor car with a choice of a five-model line-up based on grade “2” and First Edition trim levels.

For those worried that they might miss out on their daily dose of connectivity, this Kia has it in abundance.

All Stonic versions offer an extensive package of connectivity features, including links to Android Auto and Apple CarPlay via
pre-downloaded smartphone apps.

The beauty of this car is that it is a good size and connects literally with the 21st century driving, as you might expect from a car produced in 2018.

There are car makers who are still playing catch-up. Not so Kia. Under the auspices of an ultra-modern team of designers in both South Korea and Europe, Kia has been ramping up the standard in all its models to the very highest.

Sales of this type of car — the small SUV — are expected to double to around 2.2 million a year in Europe by 2020.

And whereas a short while ago, 2020 seemed an age away it is now looming large on the horizon — ask our blessed Prime Minister if she feels there is a lot of time left between then and now.

In car industry terms, 2020 might as well be next week. Like all things today that function through modern technological design and engineering, Kia car development is constantly on the move. Hence the brace of new models. I found the Stonic a satisfying drive, more so the higher spec First Edition models than the basic car.

The version I have been driving this week — the 1.6 CRDi 2 — is a perfectly capable small SUV.

It’s just that I appreciate the attributes of the First Edition more: but then you would pay extra for the privilege.

I find these smallest of engines quite extraordinary in their eagerness to deliver and the Stonic’s 1.0-litre T-GDi is no exception.

It lines up alongside a 1.4-litre multi-point injection (MPi) 98bhp petrol engine and the 108bhp 1.6-litre CRDi turbodiesel from the cee’d range.

ISG, Kia’s engine stop/start system to ensure no fuel is wasted and no emissions escape when the car is stationary, is included as standard. All versions have a
six-speed manual transmission and drive the front wheels.

Powerful and with plenty of torque (pulling power) the CRDi turbodiesel engine in Stonic is a 1.6-litre unit. Power is pitched at 1,08bhp. This powertrain enables the Stonic to accelerate from 0-60mph in 10.9 seconds on the way to a top speed of 112mph. Fuel economy is up to 67.3mpg, with CO2 emissions of 109g/km.

The engine capacity is 1,582cc and there are double overhead camshafts operating 16 valves.

Android Auto is available for Android smartphones running 5.0 (Lollipop) or higher, while Apple CarPlay is compatible with iPhone 5 and newer. Both allow users to connect to apps and functions, including voice-guided, hands-free calls and texts and voice recognition.

A DAB radio is standard and is linked in grade “2” to a seven-inch display. A reversing camera is included in “First Edition”.

All models have Bluetooth with music streaming.

• Sector volume expected to double to 2.2 million a year in Europe by 2020

• Features a suite of connectivity and electronic driver assistance systems

• Agile and comfortable, with suspension and steering tuned in Europe