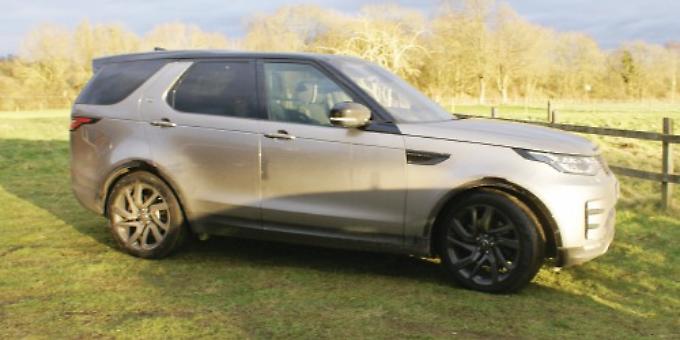 THERE is little room for equivocation when it comes to the function in life of the 2018 Land Rover Discovery.

This car is an SUV (sport utility vehicle) that is large in every sense of the word and it struts its stuff accordingly.

If you buy into this sector of the market you go for luxury, sometimes on an unconfined scale, big road space, handsome styling and large powerful engines.

There was a time, as I have said before that the largest beasts in the car jungle — the big SUVs — were an endangered species.

Not any more. With tastes in cars appearing to move to the large and demonstrable — as in, “look at me, look what I drive” — the big SUVs have once more come into their own.

Car makers are adapting rapidly to modern demands, with hybrid and eco-fuel versions coming on stream, but basically these SUVs are the same big-hearted cars commanding the byways that they ever were.

The all-new Discovery Td6 HSE Luxury I have been driving this week had at its heart the most marvellous 3.0-litre V6 turbo diesel engine — the kind of engine that governments want to outlaw completely in new cars in the coming decades. Time will tell. In the meantime, I have to say that this new Discovery has positioned itself as an excellent choice when it comes to choosing from the array of large SUVs.

One reason for this could be the price. When you get into the realms of forking out for these types of vehicles, the on-the-road price of a tad over £64,000 is truly competitive — and there is a host of optional features available.

Of course, you still have to have deep pockets to contemplate buying any large SUV, but then that’s the beauty of choice — there is something for everyone at every level in today’s all-encompassing new car market.

I believe its designers at Land Rover can be justly proud of the new Discovery because it is an excellent car and has picked up some top awards in its new incarnation.

With more money slushing around at the top, buyers from across the globe are seeking out big SUVs such as the new Discovery.

They will not be disappointed with it. Especially if the spec is similar to one I have been driving.

Its powerful turbo diesel engine with bags of torque (pulling power) was always reassuring, literally at every turn of the wheel.

The power plant rumbles away in the background as all good engines of this configuration always have done from the giant V12s to the blessed V8s of days gone by and now to this V6 turbo diesel.

On the car I was driving, the engine was beautifully matched to an eight-speed automatic transmission with alternative paddle changes on the steering wheel if you wanted them.

In Sport mode the car flew — not just in a straight line such as on a motorway but from take-off. It was also surprisingly manoeuvrable handling-wise and for parking. This Discovery was also well content to cruise along at slower speeds when required.

Of course, if you use the performance you use the fuel, with around 40mpg officially achieved on the combined cycle.

But you are talking about a car that can go from 0-60mph in 7.7 seconds and fly on into the sunset up to a top speed of 130mph. The clue to this car’s consummate comfort is in its full title — the Discovery Td6 HSE Luxury.

That last word is intriguingly accurate once you climb aboard. The Windsor leather upholstery wraps itself around you whether you are in the driving seat or a passenger.

There are heated seats front and back. In times of stress, stuck in unending traffic jams, for example, you can get a back massage at a dab of the forefinger on the all-commanding touchscreen.

This is the heart of this three-row, seven-seat SUV and its control centre. The seats are full-sized and instantly configurable from your smartphone using the world-first remote Intelligent Seat Fold technology.

Don’t be fooled by the five-star luxury interior. If you are going off-road or on unmade roads then the Discovery — in true Land Rover tradition — will lap it up.

Towing is also easily achieved with best-in-class capability. There is up to 2,500 litres of luggage space and storage. The InControl Touch Pro infotainment system features a large 10-inch touchscreen positioned high on the centre console. Fine graphics and easy-to-navigate menus incorporate the latest navigation and entertainment technologies including door-to-door navigation, which can share directions to a paired smartphone to help drivers complete journeys on foot.

Then iOS and Android connectivity combine with a 14-speaker Meridian digital surround system, with additional subwoofer, and 3G WiFi for entertainment, whether streaming songs online or playing music directly from a connected device.

Up to six 12V charging points ensure the car is equipped for the most connected families, while as many as seven USB sockets (up to nine when the rear seat entertainment is fitted) allow passengers in each row to power their smartphones or tablets simultaneously. Another technology feature is an Activity Key wristband, which allows occupants to enjoy sports and active hobbies without carrying the standard key fob.

Holding the waterproof Activity Key up to the “D” in the Discovery badge on the tailgate simultaneously locks the vehicle and disables the ordinary key, which can be left safely inside the vehicle.

This leaves customers free to run, swim, ride or play without worrying about the security of their vehicle.