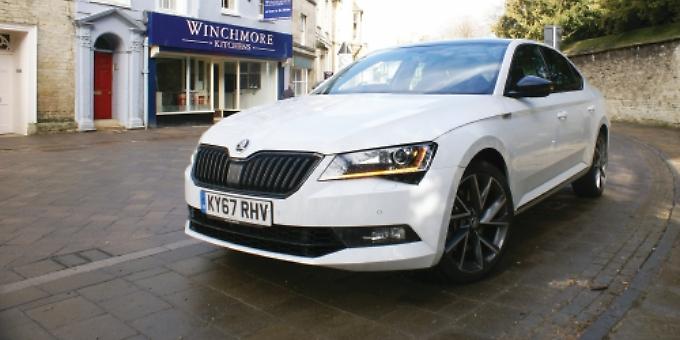 THE Škoda Superb has come a long, long way since the days way back in the Thirties when it first appeared on the market.

Now this well-turned out car, whose name was inspired by a Latin-derived word that translates aptly as a superbus, absolutely bristles with 21st century technology and know-how and checks in as a motorway flyer.

Take a first for the Czech carmaker that appears on the Superb, the brand’s first model to offer the optional virtual pedal for contactless opening of the boot lid.

On the test car I have been driving this comes as a £150 extra. But it is worth it for the sheer convenience for the driver this technology offers.

The virtual pedal uses a sensor located in the lower part of the rear bumper. When it detects foot movement, the electric boot opening mechanism is triggered. This function works in combination with the Kessy keyless locking and starting system.

Without the virtual pedal, the electric boot lid can be opened by pressing a button next to the gearstick or by using the remote control key. It can also be opened manually at any time with the unlocking button on the boot lid.

Another Superb first is the ability to access the infotainment system from the rear of the car.

A new tablet holder has also been developed, enabling rear seat passengers to attach their device on to the headrest of the passenger seat or on the folded out central armrest. A USB port and Aux In sockets are available in the front central console for the first time.

I have been driving a Škoda Superb SportLine 2.0 TSI 4x4 DSG. I shall come to the DSG in a moment, which is the excellent automatic transmission.

But first the Sportline is in a UK range for the Superb that features five trim levels: S, SE, SE Technology, SE L Executive, SportLine and Laurin & Klement. Each trim offers higher specification and equipment levels than comparable models in the previous Superb line-up.

As always with Škoda these days I am full of praise for their engines. Coupled with the ultra-smooth DSG automatic transmission the test car was powered by the new range-topping petrol engine: the turbocharged four-cylinder 2.0 TSI 280PS unit.

Fitted with the automatic six-speed DSG transmission and permanent all-wheel drive as standard, this newly developed powertrain replaces the 3.6 FSI V6 260PS as the top petrol variant. This all-wheel drive standard equipment meant that the Škoda Superb I have been at the wheel of performed well in the recent deluge of snow.

Škoda says that this new engine “showcases Škoda’s commitment to downsizing”. Despite its smaller capacity, it develops more power than the engine it replaces and is “approximately 24 per cent more efficient”.

Its practicality remains, with a 625-litre load area (660 litres for the estate) and good passenger space (especially noteworthy because it gives generous space for rear-seat passengers).

The Superb SportLine is available in three petrol and two diesel engines, with the option of four-wheel drive and six-speed DSG automatic gearbox.