New Kia makes the sharp end a pleasant place to be 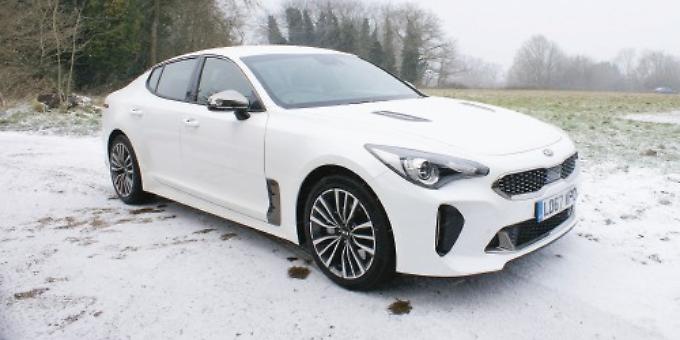 THE Stinger in the tale this week is a brand new model unveiled by Kia at a drive-day I recently attended at the car’s UK launch at a hotel near Henley.

What was striking about this all-new car first of all was its name. By any measure in today’s bland new world, Stinger is a word that stays on the lips.

But my next reaction to getting behind the wheel of the Stinger was that — in the nicest possible way — I had been there before.

I hadn’t of course because the Stinger, derived and designed from the Kia GT Concept revealed at the 2011 Frankfurt Motor Show, is a total departure for the Korean car maker.

However, driving it reminded me of something at first intangible. This became clearer, however, and was confirmed when I read in the notes that Gregory Guillaume, Kia’s European head of design, was inspired by the elegant grand tourers he saw as a child growing up in Seventies France.

How a designer can conjure up that evocation of a particular era is proof of the very power of design. But I for one got the message.

Stinger evolved in Europe at Kia’s Frankfurt studios under the watch of Guillaume and the man largely credited with turning around Kia’s fortunes, Peter Schreyer, president of design and chief design officer.

Guillaume says that even as a young boy he was drawing his own ideas for elegant grand tourers, hoping that one day they might become reality. They were his inspiration for the 2011 GT Concept and, subsequently, the Stinger.

Well it certainly will be interesting to see if this new model from Kia — a car maker that has been nothing if not proactive in car production in the past decade or so — takes off.

I think it could be a bit of a gamble. Are the great car-buying public ready for a grand tourer? I hope so because it shows that bland is not always better.

Kia has an almost unblemished record of producing striking new models and getting them to market.

Indeed, we were given the opportunity at the drive-day to sample two other Kia models that have seen improvements for 2018 — the flagship Sorento and the all-new Picanto X-Line.

More on those later.

For now, what really grabbed my attention was the Stinger, which is a departure from the dominant medium-sized and large SUVs (sport utility vehicles) and small hatches that Kia has been concentrating on.

I shall be writing a fuller review of the Kia Stinger shortly when I have had time to drive it at length. In the meantime, this is what the Stinger is all about:

First and foremost it is Kia’s first so-called grand tourer — there’s the departure from models it has become known for — and the Stinger is also the Korean car maker’s first rear-wheel-drive vehicle to be sold in the UK.

Six years in the making, the range-topping twin-turbo V6 version is also the fastest-accelerating Kia ever, with a
0-60mph time of 4.7 seconds.

Many people have questioned whether Kia would be bold enough to step outside its comfort zone and sanction a production model, but Kia says it was “simply waiting until the time was right to do so”, adding: “That time is now.”

Prototypes of the Stinger have covered the equivalent of 27 trips around the equator — taking in extreme climate testing in Europe, Asia, the Middle East and North and South America to perfect it.

There have also been many development cars which have done at least 480 laps (10,000 kilometres) of the tough German Nürburgring Nordschleife test track.

Automotive media outlets and car makers use the Nordschleife as a standard to publish their lap times achieved with production vehicles.

Five versions of the Stinger are available in the UK, all with turbocharged direct-injection engines with an eight-speed automatic gearbox and featuring high-tech electronic driver aids and connectivity systems.

The Stinger GT S, as the fastest and most powerful model in the range, also has electronic suspension damping and Brembo brakes.

The excellent Kia Sorento SUV just got better, which is a feat in itself. I really like this car, which is ultra-comfortable, powerful and looks great.

The new Picanto “with attitude” for 2018 is the all-new Picanto X-Line with “chunky crossover styling”, seven-inch touchscreen display with satnav, Android Auto and Apple CarPlay connectivity fitted as standard. Prices start for Picanto at £12,595.

• Three turbocharged engines, all with an eight-speed automatic gearbox

• Range-topping model powered by a 3.3-litre twin-turbo V6 engine capable of
0-60mph in 4.7 seconds — faster than any previous Kia