Mazda’s sound quality keeps up with its looks 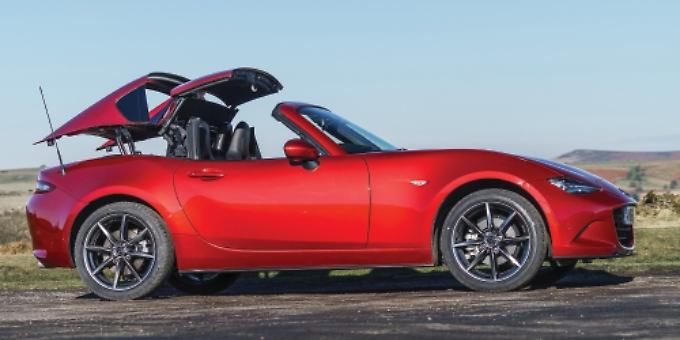 WHAT next for the Mazda MX-5, the super little Japanese sports car that continues to defy the social mores of an age dedicated to rapid and ruthless digital progress?

Well, the phrase “If it ain’t broke, don’t fix it” — famously attributed to T Bert Lance, a budget official in the 1977 US administration — springs to mind.

And yet a few years ago Mazda had the courage and foresight to radically change the fourth generation of its star performer.

The move was a triumph and recreated a sports car fit for 21st century driving that had first debuted to world acclaim at the Chicago Auto Show in 1989.

In 2018, bang up to date, the Mazda MX-5 has taken What Car magazine’s “best convertible” title for the third year in succession.

Of course, the 2018 Mazda MX-5 RF I have been driving this week is still instantly recognisable as an MX-5.

But now the car is sleeker and trimmer — the fourth generation MX-5 is 105mm (four inches) shorter and 100kg (220lb) lighter than its predecessor.

It can still turn heads yet holds its own with the omnipresent SUVs (sports utility vehicles), hatchbacks, and city cars that surround it on today’s roads. The new MX-5 RF (Retractable Fastback) model’s top panel of the roof folds back electronically in seconds — similar to a Targa top, first seen on the 1966 Porsche 911 Targa.

The RF version features a rigid roof and buttresses that give the silhouette a more coupé-like aspect than the soft-top convertible. The top panel of the roof folds back whilst the buttresses remain in place.

The RF features a noise absorption headliner integrated into its roof design, while additional sound insulation material ensures road noise is lowered to a level that complements the wind noise reductions achieved by the roof.

Front and side airbags are standard, and the side airbags feature a special bracket on the outside shoulder of the seat to protect occupants’ heads even with the top down.

The roof is controlled at the touch of a button and features a powered roof latch that replaces the manual unit on the last-generation retractable hard top (RHT) MX-5. Opening and closing the roof takes just 13 seconds in both directions. In addition, the roof operation status is animated on the full colour TFT screen — thin-film-transistor (TFT) technology is employed to improve image qualities such as addressability and contrast — housed within the left hand instrument dial.

Unique to the RF, this high-resolution TFT display also shows trip information, fuel level, coolant temperature and compass bearing. Mazda’s MZD-Connect in-car connectivity and integrated navigation system is standard on all models. Accessed via the seven-inch colour touchscreen display and Multimedia Commander, in addition to navigation functions, it works with compatible internet-enabled iPhone and Android smartphones to access a variety of free mobile content via Aha or Stitcher applications.

Meanwhile, Bose and Mazda have teamed up to develop a sound system tailored to the MX-5 even with the roof down.

Standard on Sport Nav models the system includes nine high-performance speakers including UltraNearfieldTM speakers in each headrest, plus a 13cm woofer in a bass enclosure in the footwell and a digital amplifier below the soft-top storage.

The UltraNearfieldTM speakers create a sound that’s perceived much wider than the actual distance between speakers so that music seems to extend beyond the confines of the cabin, whether the roof is up or down.