Foot-down encounter had Stinger in the tail 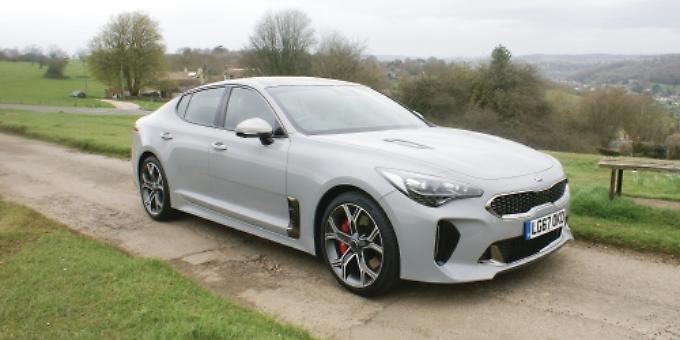 IT was one of those great moments in a motoring life that you appreciate because all of us seem to be constantly under the watchful eye of the politically correct.

Sure, no one should be racing cars on public roads these days and I adhere wholeheartedly to that.

However, I was at the wheel of this week’s drive — the quickest new Kia Stinger, a model with a
3.3-litre V6 engine that produces 365bhp (that’s a lot) and sprints from 0-60mph in 4.7 seconds. So what are you going to do?

Let’s just say my opportunity to put the Stinger through its paces came on a nice stretch of practically deserted dual carriageway.

The Stinger is no slouch — it is a sophisticated 21st century fastback-style five-door car with gran turismo written all over it (more of which later). But I wanted to test it at speed and in its sport plus mode it goes even faster (there are smart, eco, comfort, and sport modes, too).

Anyway, back to the action. In my rear-view mirror up close as we came onto the dual carriageway was what looked like a Fifties American Chevrolet pickup with a bad paint job. (I know something about these vehicles as a friend has one.)

However, my friend’s appears docile. So I thought, as the pickup with the challenged paintwork got closer still, I would blow him away. Just the tiniest bit of indulgence, you understand. I put my foot down.

In sport plus mode the Kia Stinger is very restless, like a racehorse waiting in the stalls for the starter’s gun. You can almost hear it whinny, as it wants to be off.

So the car leapt forward. I was now what is commonly known as hoist by my own petard — a great expression that I have never fully appreciated the meaning of until now.

One hundred yards down the dual carriageway and the Chevy pickup still filled my rear-view mirror. I had been unable to shake him.

I acquiesced and became a gentleman driver in a splendid-looking motor car. I pulled over to the inside lane to let the pickup through.

It stormed by and, bowing to the driver’s superior road craft — foot hard down regardless — I gave him the thumbs up (which he saw clearly as the pickup was a left hand drive). The Chevy pickup happened to be going my way. In a supermarket car park we compared notes. I asked what was under the bonnet of a truck that belonged in a prairie painting of the American Old West.

He lifted the bonnet and I stared in awe at a beautiful chrome, petrol-smelling V8 engine. It was a Chevrolet small-block engine, one of a series of V8 engines built by the Chevrolet Division of General Motors between 1955 and 2003.

Fun over, I continued on my way in my grand tourer (gran turismo) which is defined as “a performance and luxury automobile capable of high speed and long-distance driving”.

Certainly, the Stinger fulfils all of those criteria. But it’s a departure for Kia. There has been talk of the car being a risk for the Korean manufacturer, which in the past decade has not put a foot wrong.

But having spent some time with the Stinger I think even if the car does not sell in bucketloads here in the UK it will have great appeal globally.

It is the kind of sports saloon that has the looks, performance and comfort at the right price — the top of the range Stinger 3.3 T-GDi V6 GT S costs £40,495 on the road, which is not a lot for a car with supercar potential.

The 3.3-litre twin-turbo Stinger V6 T-GDi is the fastest-accelerating Kia ever, with the aforementioned 0-60mph time of 4.7 seconds and a top speed of 168mph.

All versions drive the rear wheels through an electronic eight-speed automatic gearbox. The transmission has five different shift and throttle programmes.

Drivers can leave the car to shift for itself or change gear using steering wheel-mounted paddles. A limited slip differential is fitted to all models so that torque (pulling power) is transferred to the rear wheel with most grip.

The brakes for the 3.3-litre GT S were co-developed with Brembo and are holed and grooved to provide high heat capacity with low fade, even in repeated heavy use.

This is supplemented by Android Auto and Apple CarPlay connectivity, which via pre-downloaded apps on a suitable smartphone links the car to maps, music, podcasts and texts through voice commands. There are front and rear USB ports, while the GT-Line S and GT S have a wireless phone charger.

• Three turbocharged engines, all with an eight-speed automatic gearbox