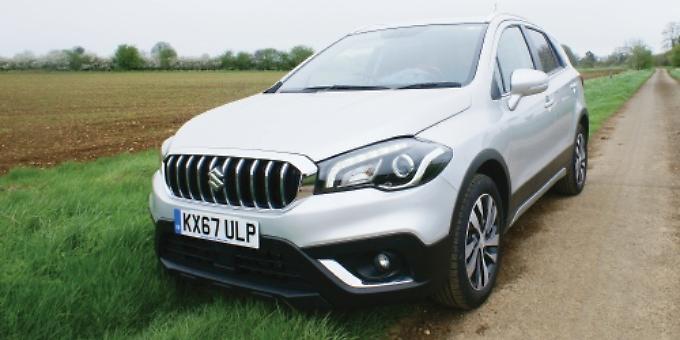 PROGRESS is of course relative and nowhere more so than in the world of cars.

When the digital age throws up yet more bureaucracy for us to cope with you have to wonder if we are making any headway at all.

Of the many cars I drive, it is often the simplest design features inside and outside the car that are the most successful.

Take this week’s drive, the Suzuki S-Cross. This car demonstrates perfectly to me what progress is really all about when it comes to car manufacture.

It’s really not so long ago when Suzuki cars might have been considered to be at the margins in terms of desirability in a rampant global auto market.

Sure, Suzuki — known for its motorbikes — has been around for a good while now as a car maker.

By 1954, Suzuki was producing 6,000 motorcycles per month and had officially changed its name to Suzuki Motor Co Ltd. Following the success of its first motorcycles Suzuki created a car — the 1955 Suzuki Suzulight — which also proved to be successful.

In recent years, I have been more than impressed with Suzuki’s new models — such as the Swift — but I have found this week that in my book this new S-Cross takes Suzuki another step up.

Why? Well, for a start it looks the part. And it looks most convincing now from the front.

I could not have put it better myself. You see, by emboldening the overall design of the car, it translates to the potential customer that Suzuki means business.

They say that looks are not everything, but in the case of the S-Cross I would say that everything good about this new model emanates from the front-end design.

It somehow makes the car more convincing as a player in this medium sized SUV (sport utility vehicle) sector of the market, which is now massive.

So what do you get apart from this assertive new look? Ground clearance is now slightly higher at 180mm and new design headlamps help provide both higher efficiency and the sharper look.

At the rear, the same attention to detail with newly designed LED rear combination lamps adds to more contemporary style.

I have been driving the 1.4 Boosterjet SZ5 Allgrip model. There was ample room for five occupants with luggage. A plus in the SZ5 and a must for touring was the double sliding panoramic glass sunroof fitted as standard. This is one of the largest opening areas in its model category (560mm). The Boosterjet engine was more than willing to perform, which again I think is a must in any car of any size today, no matter what the engine’s cubic capacity registers. It’s all about torque (pulling power) and the Boosterjet does the job well.

Suzuki’s Boosterjet petrol engine technology was first utilised in the Vitara as a 1.4-litre unit and the 1.0-litre version followed in the Baleno model.

After the debut of the three cylinder Boosterjet 1.0-litre unit this engine technology now continues for the Facelift S-Cross. Offering the same level of power and torque of a much larger capacity normally aspirated engine (1.8-litre), it more than delivers.

Suzuki’s Allgrip system is available on SZ-T and SZ5 models. It has four driver-selectable modes for driving on diverse surfaces.

In development, the Allgrip system was enhanced by the addition of a feed forward function that allocates torque to the rear wheels before any slippage can occur.

Four-wheel drive is typically seen as detrimental to fuel economy and emissions performance.

CO2 emissions for the new 1.0-litre Boosterjet petrol engine with manual transmission is just 119g/km for the 1.0-litre and 127g/km for the 1.4-litre. The optional automatic transmission equipped 1.4-litre model is only one gram higher, while the S-Cross with 1.6-litre DDiS engine and Allgrip has a figure of 114g/km.