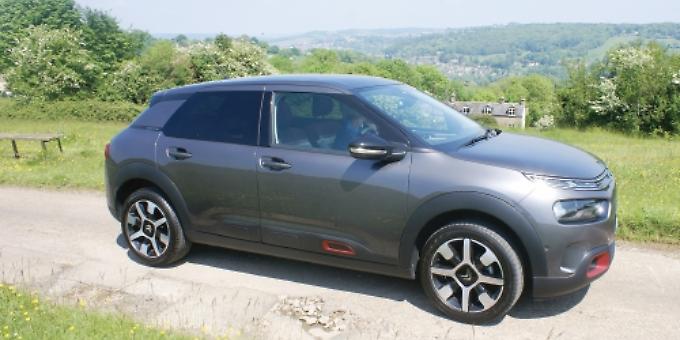 THAT cheeky chappie of not so long ago, the Citroën Cactus C4, which so made everyone sit up and take notice at its inaugural outing at the Geneva Motor Show four years ago, has finally grown up.

Which is to say that as far as I can tell, the Citroën Cactus C4, with the rather batty bump bars down each side and its devil-may-care look, is now a far more sophisticated motor car.

Ah well, I suppose it happens to us all. We start off a bit edgy and out there (or so we like to think) and gradually as the years pass we learn to conform. Is that the same as growing up? I never know the difference.

Anyway, the new 2018 Citroën Cactus C4 Hatch Flair, which I have been driving this week, was a polished and understated performer. Yes, understated, and that was a very unCactus-like turn of events.

To explain a little more: when I reviewed the Citroën Cactus C4 in 2015 I said: “I confess that at first I didn’t know quite what to make of it. The test car was not easy on the eye in its bright yellow livery. It had what looked like odd ‘crash’ panels attached to its sides that you might find on a dodgem car at a fair.”

Now the key to this new version is that the original, described
as a compact SUV (sport utility vehicle), has “evolved” into a sophisticated hatch.

The version I have been driving, the Flair, took to its new role with aplomb — helped, I think, by the test car’s fairly sober grey livery.

To be fair, Citroën has also upped its game with the C1, C3 and new C3 Aircross SUV, all of which look to me to be smoother and more sophisticated models as they mature with development.

The Citroën C4 Cactus Hatch is now in the French car maker’s own words, “packed with new thinking and fresh style”.

Well, I would certainly concur with that. The famous Airbump distinctive design feature panels on the car’s sides, designed to protect the vehicle from damage in car parks, are still there.

But they are subtler, carefully moulded into the car’s overall sleeker hatch design and no longer too far “out there”. (Originally, when I was driving the early SUV version, I recall onlookers scratching their heads and not knowing what to make of the Airbump panels.)

You have to remember this is a French-made car and it is a Citroën, which has been famous for innovation and experimentation in car production since it first placed tyres on tarmac way back.

Indeed, by 1934, Citroën had established its reputation for innovation with the Traction Avant, which was the world’s first mass-produced front-wheel-drive car. The Avant was also one of the first to feature a unitary-type body, with no chassis holding the mechanical components.

And in 2018, the new Citroën C4 Cactus Hatch displays that same thirst for innovation with the first model in Europe to feature suspension with Progressive Hydraulic Cushions (PHC). It is also the “first in the world” to be equipped with Advanced Comfort Seats.

The ride was interesting with the C4 Cactus Hatch dealing with with the potholes plague on our roads with some disdain. This is down to the mode’s “Suspension with Progressive Hydraulic Cushions” filters that “absorbs major and minor surface imperfections” — in Britain’s case, potholes on practically every street.

The way it works is this: traditional suspension systems are made up of a shock absorber, spring, and mechanical stop; the new system developed by Citroën adds two hydraulic stops, one for compression the other for decompression.

The Citroën C4 Cactus Hatch is equipped with 12 driver assistance systems that combat drowsiness or moments of inattention and the risk of accidents.

The latest-Generation PureTech petrol engines, voted Engine of the Year, and the BlueHDi diesel engines comply with the Euro 6 standard on the reduction of NOx emissions and fuel consumption.

The EAT6 gearbox is fitted on the PureTech 110 S&S engine. The C4 Cactus is also available in a PureTech 130 S&S six-speed manual version.