SUV’s flowered into an even bigger beast 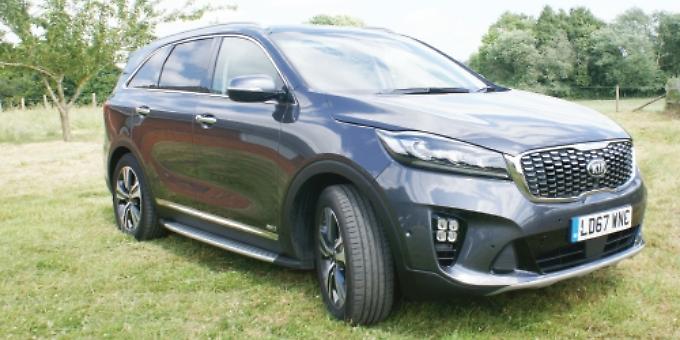 ABOUT this time of year land around Snowshill in the north of the Cotswolds is tinted with the unmistakable hue of lavender fields in full flower.

The first time I drove the new Kia Sorento was in 2015 on a trip to see this superb sight — an understated spectacle that hundreds flock to each year.

The Kia Sorento then was impressive against the backdrop of the lavender fields.

But this big, handsome SUV (sport utility vehicle) in 2018 just got better.

The updated, third-generation flagship vehicle for Kia in the UK has new GT-Line and GT-Line S variants added to the model roster.

As well as a price tag that gives more expensive rivals a run for their money, this luxurious SUV has a new eight-speed automatic gearbox that replaces the former six-speed unit. And the 2018 Sorento has a new understated sportier look that is very appealing.

The new eight-speed auto gearbox, which operates smoothly and efficiently, is offered in four of the seven Sorento models.

Kia says economy with the new auto gearbox improves to 43.5mpg compared with the previous automatic, while CO2 emissions are cut from 174g/km to 170.

The option for drivers is to leave the car in fully automatic mode, or change gears with steering wheel-mounted paddles in the GT-Line and GT-Line S.

The Sorento continues to be available with a six-speed manual gearbox if preferred in certain versions.

This is a 197bhp 2.2-litre turbodiesel engine that drives all four wheels through an intelligent four-wheel-drive system.

The “subtly sportier look” of the GT-Line and GT-Line S versions
(I have been driving the latter) works well because it gives the Sorento a modern flair for 2018 without going overboard.

More interior space has been made possible by a 95mm increase in overall length compared with its predecessor and a 80mm longer wheelbase.

The Sorento’s rakish looks — that so attracted me to it in the first place — are helped further by a 15mm reduction in height and a 5mm wider body when measured against the previous model.

There is no doubt diesel power is on the back foot with recent government proclamations that the diesel engine’s days are numbered.

However, the 2.2-litre turbodiesel engine fitted to all seven Kia Sorento models remains a winner for the foreseeable.

The engine develops 197bhp, which gives the Sorento great driveability on- and off-road.

Manual models accelerate from 0-60mph in 8.7 seconds, with the auto taking 9.1 seconds, and all versions have a top speed of 127mph.

All models have Kia’s Intelligent Stop & Go (ISG) engine stop/start system to ensure that no fuel is used and no emissions are released when the car comes to a halt.

All Sorento versions have Trailer Stability Assist for safe towing. The Sorento has all-independent suspension and motor driven power steering.

Depending on model, the Sorento features a number of new technologies. The Sorento has been awarded five stars in Euro NCAP safety tests.

All versions have a digital DAB radio compatible with MP3 players and Bluetooth with music streaming, and now feature Android Auto and Apple CarPlay, which offer voice control. A reversing camera is available on all grades.

I liked the GT-Line S version because it does not stint on providing essentials that qualify it for the luxury tag.

These have to be essential ingredients these days for any large SUV only with Kia this does not bump up the price to ridiculous heights.

• Updated third-generation flagship SUV for Kia in the UK