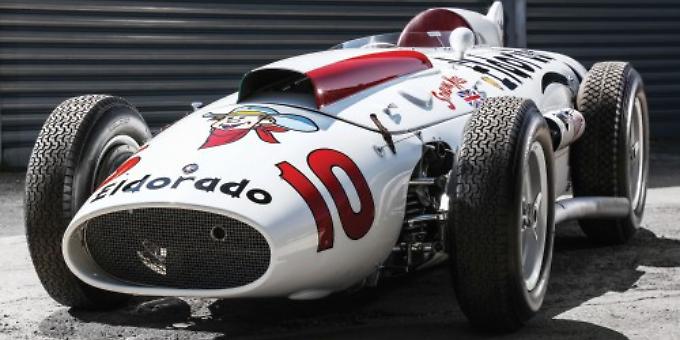 Though an exotic enough name, the Eldorado was actually sponsored by an ice cream manufacturer.

On June 29, 1958, Europe’s first sponsored single-seater racing car, the Eldorado, took to the track at Monza, with legendary British driver Stirling Moss at the wheel.

The Maserati Eldorado was the first single-seater racing car in Europe to be sponsored by a brand not linked to the world of motorsport.

Maserati was commissioned to build the car by Gino Zanetti, owner of the Eldorado ice cream company.

Determined to promote his brand on the international stage, Zanetti turned to the House of the Trident to create a single-seater car to compete in the “Trofeo dei due Mondi” (aka the “Race of Two Worlds”) at Monza.

The Automobile Club d’Italia had organised a 500-mile race at the circuit based on the Indianapolis 500, with top American and European drivers lined up to compete.

The long silhouette of the Eldorado also bore the name of the driver chosen to race it in the “Monzanapolis” — Stirling Moss.

The race at the Monza track was held in three heats to decide the final points table. This strategy was aimed at enticing European car manufacturers to enter their own cars, which had not originally been designed to compete in such a long race. In the final heat, Moss’s steering broke and the Maserati slammed into the guard-rail, dashing the English driver’s hopes of finishing the race in third place overall.

Taking into account three heats and the total number of laps completed, Moss nonetheless took seventh place in the end. He walked away unscathed from the crash and the Eldorado suffered only limited damage. The 500 Miles of Monza did not become a regular event on the racing calendar but the Eldorado has remained a legend.

The Maserati Eldorado, restored in its original white livery, is part of the Panini Collection housed in Modena, Italy.