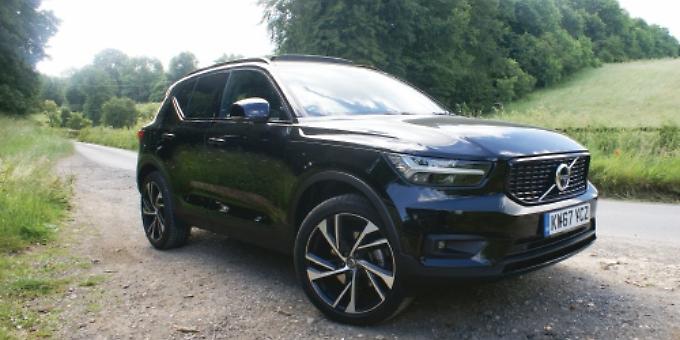 I AM not much of a flag waver myself and yet the tiny flutter of a flag on the new Volvo XC40 caught my eye and spoke volumes.

The flag was the distinctive yellow Nordic Cross on a blue background. It is the national flag of Sweden where Volvos of course proudly originate.

It was small yet significant and made, as far as I could tell, from rubber. The flag peeped out from the bodywork on the nearside front of the car.

Volvo has every reason to be raising a flag to the success of its new XC40 SUV (sport utility vehicle).

The XC40 completes the car maker’s family trio of SUVs — the others are the XC60 and XC90. And again significantly, the XC40 has been named overall winner in What Car? magazine’s 2018 car of the year awards.

So the plaudits are out there but what does the XC40 offer? Certainly, for Volvo it completes in style the car maker’s new three-model SUV line-up.

For the first time in its history, Volvo has three new globally available SUVs in what is the fastest-growing segment of the automotive market.

For growing families who want this kind of connectivity at all hours of the day, including while at the wheel, the XC40 also offers interior space without compromise plus exterior style.

And again, with the safety and wellbeing of the driver and all passengers — including children — firmly in mind, Volvo piles on the features in the XC40.

Clearly, Volvo is moving inextricably towards the goal on safety in its Vision 2020 pledge to reduce the number of people who die or are seriously injured in road traffic accidents in its cars to zero.

I think this feeling that you are as safe as you can be on the road today comes through every time I drive a new Volvo. This is because even when it was unfashionable, Volvo has stuck to its guns on safety for all in its cars.

No other car maker has this solid reputation which makes Volvo’s 2020 pledge all the more feasible.

Away from the safety aspect for a moment, the designers of the XC40 claim “a radical new approach” to storage inside the car.

I’m not sure how radical this is but there is in the XC40 more storage space in the doors and under the seats.

There is also a special space for phones (including inductive charging), a fold-out hook for small bags and a removable waste bin in the tunnel console.

The engine — a 190hp four-cylinder 1,969cc diesel on the test car — together with an eight-speed auto transmission was full of torque (pulling power) and pleasantly economic.

From the start of production, the XC40 was available with a D4 diesel or a T5 petrol four-cylinder Drive-E powertrain.

Further powertrain options, including a hybridised as well as a pure electric version, will be added later.

Simplicity of design meant that the gearshift — though it did take a bit of getting used to on my part — was a simple action once mastered.

A lot of cars I drive now include the obligatory paddle gearshifts mounted on the steering wheel — and I’ve wondered if they are always necessary. Volvo’s simple auto shift seemed perfectly adequate without the paddles (which were included).

However, car makers try to cater for all tastes, and I think the XC40’s success so far in terms of both sales and the media reaction to it speaks for itself.

I especially liked on the test car the power glass tilt and slide panoramic sunroof with sun curtain, the adaptive cruise control and the heated rear seats.

This multi-award-winning car has been referred to as a game-changer and is Volvo’s most successful new model launch ever in the UK.

To my mind this demonstrates that diligence in design, an eye for detail and a regard for quality still count for something very significant in today’s world of cars.