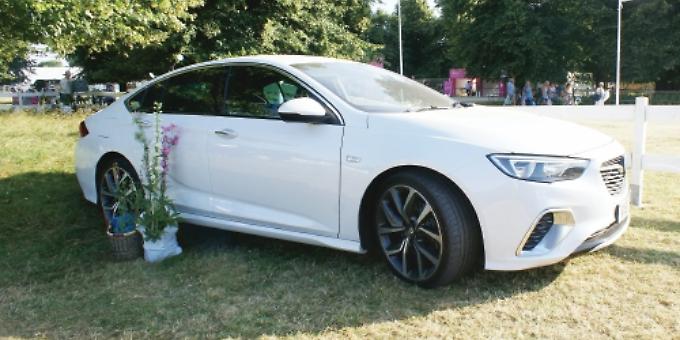 A WELCOME aspect of attending the biggest annual flower show in the world last week was the recognition that gardening can “improve your wellbeing”.

I would never be one to argue nowadays that motoring might improve your mental health. Yet once upon a time a good drive was both exhilarating and a way to unwind from everyday stress.

Now motoring might be considered by some to have exactly the opposite effect. Nevertheless, it is heartening to be made more aware that gardening remains a tonic for many, including myself.

This week’s drive to the 2018 RHS Hampton Court Palace Flower Show was a car of interesting antecedents.

Though barely a decade old, it is marketed — like many other models today — as a global car. It is the Vauxhall Insignia in Britain. Produced in Germany, it is badged differently around the world — as the Buick Regal in North America and China and as the Opel Insignia in Chile, for example.

There is no doubt that Vauxhalls are popular for their value for money and the Insignia is no exception. Indeed, a second-hand Insignia is a down-to-earth car, economic to buy and recognised in “real-world terms” when it comes to modern motoring. To this end, the Insignia was given the title of Used Car Hero in the 2018 Autocar Awards.

Now comes something added to the Insignia range: the GSi. The 2018 version I have been driving came with I think the longest title for a car I can recall: it was, in full, the Vauxhall Insignia GSi Nav Grand Sport 2.0 210PS BiTurbo D 4X4 Auto BlueInjection S/S.

All you really need to know in that grand title is that the GSi continues the good value tag of this marque — the total price of the test vehicle was £37,840.

But where it really scores highly for me is in its performance.

Indeed, the Insignia GSi has demonstrated its exceptional performance levels at one of the world’s most challenging race circuits — Germany’s Nürburgring. The lower-slung Insignia GSi (10mm closer to the road than the rest of the Insignia range), and 160kg lighter than the previous Insignia VXR, is the quickest Vauxhall production car to take on this famous German track.

On the technical side, this showing of the new Insignia GSi is explained by Vauxhall thus: all-wheel drive with torque vectoring, a new mechatronic FlexRide chassis, Brembo four-cylinder brakes and Michelin Pilot Sport 4 S tyres on 20-inch rims.

Willing power comes easily on motorways from a 2.0-litre turbo petrol engine supported by an eight-speed automatic gearbox. There are also the inevitable shift-paddles on the steering wheel, which add to the drivability appeal of this car if you want more “involvement”.

Actually, we made excellent time to the flower show at Hampton Court from our home in the Cotswolds simply because the Insignia GSi is essentially at its best on longish motorway journeys (this was a round trip of about 170 miles).

But the car was also comfortable, with good air conditioning on a very hot day. I have criticised Vauxhalls passim for not being comfortable enough (particularly with regard to passengers) and yet the Insignia GSi proved a satisfactory ride.

Aptly, because we were at a flower show, one of my perennial beefs at Hampton Court is that car makers seem to have just about extinguished their interest in being represented.

Surely this pristine event, which attracts many thousands of people from around the world, is worth some sort of exposure for a car maker? It always was in the past.

I only saw one display involving cars. But that was more about the cars. In the past it has been a combination of a fine garden and the environment plus cars that has drawn attention. There have been in earlier years several top car makers present — after all the car is very much a part of our lives as is a house and garden.

On the latter front, I particularly enjoyed a quote from one designer with regard to our wellbeing.

Pollyanna Wilkinson said that gardening offers the chance to exercise, to reconnect with nature and combat depression and anxiety.

Ms Wilkinson’s garden, called A Very Modern Problem, used some imitation plants that were making a first appearance in the history of the show.

But her design was, she said, “a bold portrayal of the way social media can misrepresent the truth and create conflicting feelings of inspiration and inadequacy”.

While the everyday commute by car offers stress as a main ingredient, you can always have a garden, however large or small — a window box will do — to drive home to.