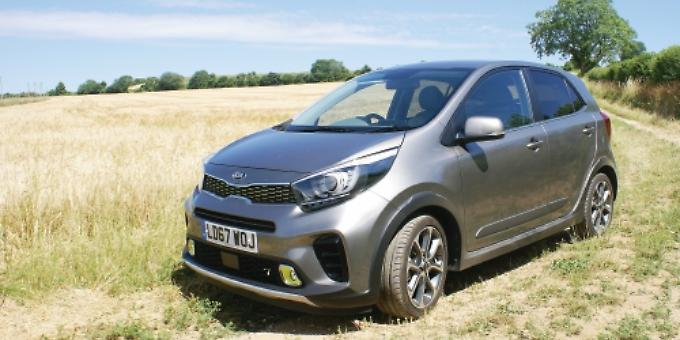 THE smallest of cars come in all shapes and sizes. No, scratch that, they come in one size — small — and that should fit all.

They are rather like those annoyingly labelled winter woolly hats you see in shops where it says quite confidently “One size fits all.”

How do they know how big my head is? Actually, I discovered early on my head was unusually large when I tried to buy a motorcyclist’s crash helmet — but that’s another story.

I have in past weeks been driving various small cars. The surprise was that what they have in common is that they were uncommonly good as a means of everyday transport.

Take this week’s drive, the new third generation Kia Picanto. The Picanto competes in the city car sector of the UK and European car markets, a step down in size from traditional so-called super minis.

It is Kia’s smallest car in Europe and for the first time mixes it up a bit with the type of city car you might fancy buying.

This new 2018 Picanto offers two body styles for the first time — including the crossover-style X-Line model alongside the conventional five-door city car version.

The car I was driving was the Kia Picanto X-Line 1.25 MPi. But first a word of explanation about the definition of a “crossover car”.

A crossover or crossover utility vehicle (CUV) is a vehicle built on a unibody — that’s a “chassis” if you are old school — car platform. The crossover combines features of our old friend the sport utility vehicle (SUV) with those of a passenger vehicle, especially an estate car or hatchback. Car makers have learned that there is an increasing demand across the globe for these crossover-type models over conventional city cars.

That is why Kia has decided to introduce the X-Line to the Picanto range. The X-Line and X-Line S variants are longer, wider and taller than conventional city cars and have increased ground clearance.

They make no pretence at being a full-blown SUV, says Kia — they are driven through the front wheels only — but have a more rugged look, which is aimed at broadening the appeal of the Picanto in a market in which the crossover is king.

I like these little cars and especially Kia’s take on “expanding” the range to take in the crossover element.

Most of us seem to want to be seen swanning around in big cars — as always, there is a car available to match every ego, however overinflated. But in many ways the humble small car — call it a city car, super mini or what you like — is ideal for our crowded roads.

Most of them now, certainly the Picanto, can hold their own on motorways. In our overburdened cities and towns if you have to use a car they are ideal.

I have appreciated in these past weeks the sheer size of the cars I have been driving simply because manoeuvrability and most importantly parking is so much easier.

The most recent news about the Picanto is that the range is now complete with the debut of the flagship 1.0 T-GDi engine. The new powerplant develops 99bhp, making it the most powerful Picanto ever. It can accelerate to 60mph in 9.8 seconds and has a top speed of 112mph.

I concur with Kia’s philosophy that “small cars do not have to be spartan cars”. I have been saying for some time that comfort and the best connectivity should be an integral part of the small car package.

Kia says customers “cite equipment levels among their chief considerations” when deciding which car to buy.

From grade two, features such as air conditioning and electric rear windows, electric heated door mirrors, Bluetooth with music streaming and a leather-trimmed steering wheel and gearshift are standard. And so on up the grades.

So as you can see, the humble small car — in this case the smallest of cars available in the Kia range — is not so humble after all. The X-Line model was equipped with 16-inch rather than 15-inch alloy wheels, unique grey faux leather upholstery, satin chrome door handles, stainless steel pedals with anti-slip inserts and privacy glass on the rear windows and tailgate.

X-Line has body-coloured rather than chrome exterior door handles, skid plates beneath the bumpers, twin exhaust outlets, black side mouldings, chrome side window trim, projection rather than multi-focus headlights and LED daytime running lights and rear lights. The seven-inch touchscreen display with DAB radio and RDS and is compatible with Android Auto and Apple CarPlay.

Oh, and by the way it drives well. What more could you ask for in a car unless size really matters to you and your ego?

• Third generation of Kia’s smallest car in the UK