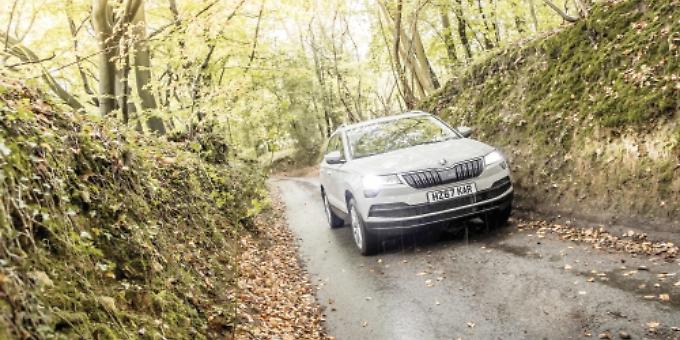 GIVE a car a boost of real power in the engine department and it can make the world of difference to the way it drives.

Obvious, yes, but you would be surprised at the number of new car buyers who pay good money only then to discover their purchase is underpowered for their needs.

A clue may lie in the way engine power these days is shown by some car makers in a measurement called PS rather than old school BHP (brake horse power). PS stands for the German Pferdestrke (translated literally as “horse strength”).

Of course I am still a BHP man and can’t help myself in the same way I still dwell on feet and inches — though I have successfully converted to degrees centigrade rather than Fahrenheit.

Anyway, with cars you may have to crack a power code unfamiliar to you to get the engine torque (pulling power) you desire.

This can be important when choosing a new car because I have found driving an underpowered vehicle frustrating.

So this week’s drive was the Škoda Karoq, a new compact SUV.

Bearing in mind what I have been discussing above about getting the correct power, I am almost certain I would prefer this 150PS output to the 115PS of the TDI diesel models. In BHP terms, the 150PS comes in at around 147.9bhp.

Why would I prefer the 150PS? Simply because this 4x4 Karoq was tough and durable and necessarily carries some weight as any vehicle capable of good off-road performance should.

And the more powerful engine would be, I guess, better for towing. The 2.0 TDI 150PS engine did the job excellently on both motorway driving and slipping down country roads and lanes. While I am beginning to prefer the automatic transmission in medium to large SUVs I did not have a problem with the six-speed manual box.

However, driving a turbo diesel engine with a manual box requires a bit of technique because the engine is naturally low-revving.

So taking off I found I had to make sure the engine revs were up. I have been blown away in recent weeks by the incredible good value of some of these new compact SUVs. The Karoq SE L model test car came in at a tad over £30,000 with around £1,500 worth of options fitted. Included in this was a towbar — removable with an adaptor — for £850. The bottom line is why would you pay double and upwards on this total price for a larger, less economical SUV when you can get all you need from the new compact SUVs such as the Karoq?

Škoda’s one-millionth SUV rolled off the production line this August at the Czech Kvasiny plant. The milestone vehicle was a Karoq finished with a metallic Emerald Green finish.

Today, Škoda’s Kodiaq and Karoq SUV model lines are an integral part of the car maker’s 2025 strategy. Of the one million SUVs produced by Škoda to date, more than 100,000 have found homes with UK customers.

It’s not rocket science, this power debate, but it is important to get the best performance from your new car — but most of all a performance that totally satisfies you as a driver. Whether you think in terms of PS or BHP, this can be easily circumvented by simply getting in the car and driving it — seeing just how it handles.

My advice always is drive and drive again before you buy. Do not be afraid to take the opportunity to drive any potential buy as much as possible before you lay out the cash.

Key features fitted to all SE L models include: