Electric car's well worth a plug 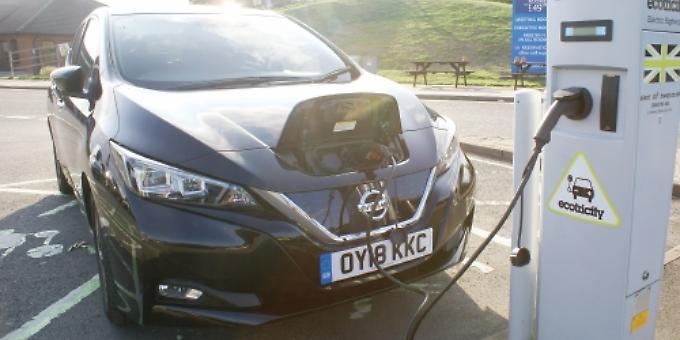 IT seems to me that the driver of an all-electric car experiences two conflicting emotions while at the wheel.

One is a rather somnolent state of mind where you are more relaxed and calmer than you might be while driving a “normal” car.

The second is one of inner anxiety — the principal concern of which is simply, will I make it to where I am supposed to be going?

Range anxiety, as it is known, is the most common, nagging concern of new drivers of electric vehicles. It is an issue that has dogged earlier versions of the electric car.

Indeed, I have experienced this anxiety in the past each time I have driven an electric car.

However, the good news is that while at the wheel of this week’s drive, the 2018 all-electric Nissan Leaf, that former anxiety has been addressed.

I say addressed with some reservations because actually I think some concerns remain, which I shall get to later.

For now let me tell you what happened during my latest outing with an electric car.

When the car arrived the battery power was 97 per cent charged. That would give me a range, said the car’s computer, of 147 miles. Plenty, actually, for the journey I had planned.

That was from Cirencester, where I live, to Sonning Common, near Henley, via a stop in Reading itself. This is a distance of 60 miles. So we faced a round trip of 120 miles.

Before setting off I checked with the charging network provided by Nissan. Now most of my journey would be on a motorway, but I was informed that this particular network did not have any charging points on motorways.

What I needed for long distance journeys, says Nissan, is the Ecotricity app installed on a smart phone (if you have one).

The Ecotricity Electric Highway network is a pay-as-you-charge service with rapid charge points at most UK motorway service stations.

On a 50kW Rapid DC Charger the Leaf can take 40-60 minutes from the alert that tells you that you need to charge the battery to 80 per cent charge.

By contrast (and I did, as they say, try this at home) the 10A EVSE cable supplied with the Leaf that connects to a domestic socket can take 21 hours to charge.

The bottom line in all this is that if you are aware that you need to charge your electric car (rather as with your mobile phone) then you need not suffer range anxiety.

However, driving technique in the electric car is different. Many cars now travel at least at the 70mph speed limit on motorways, many up and beyond that limit. I do not think you would ever get the best out of your Leaf if you drove at those sorts of speeds. Which is not a bad thing. A lot of motorists drive too fast on all types of roads in Britain.

I chose to see if I could get there and back to Sonning Common on a 97 per cent charge and I did — arriving home with 13 per cent battery charge available (translated into some 23 miles “in the tank”).

It has to be said that Nissan has really worked hard to make the Leaf a success. I like that commitment.

So inside the car is excellent. You have just about everything a “normal” car might have, including: faster heater along with air conditioning, cruise control, front and rear electric windows, an excellent Bose Premium Audio sound system, heated seats and even a leather heated steering wheel.

Whether or not you have the courage to have many of these or some running at the same time is another question.

However, if Nissan’s claim that the average UK commuter drive is just 20 miles per day is true, then a Leaf could be for you. It makes great sense to me that for shorter journeys in urban areas or even limited trips in rural areas, the electric car could be a boon (and in London, of course, the Leaf is exempt from the congestion charge).

Sort out the charging, whether at home or work or at the public charging points that are mushrooming around the country, then ultimately the electric car could become commonplace.

Electronics wizard Sir James Dyson recently published details of a planning application to build more than 10 miles of test track on a former Second World War airfield in Wiltshire. He wants to produce an electric car as early as 2020.

No wonder Dyson is racing to develop an electric motor car. There has to be a fortune to be made worldwide and everyone, it seems, from the internet wunderkinds Google and Apple to major carmakers is jumping on the bandwagon.

Nissan, of course, has been there for some time and indeed celebrated the 100,000th delivery of the Leaf car this summer in Europe — in a move hailed as a victory for electric mobility.

Globally, more than 320,000 Nissan Leaf cars have been sold, making it the highest selling electric vehicle in the world.

With now more than 37,000 new Leaf cars ordered in Europe, the carmaker says one new Nissan Leaf is sold every 10 minutes in Europe to customers looking to switch to zero-emission technology.

The Leaf is also equipped with an e-Pedal, which allows drivers to start, accelerate, decelerate and stop — simply by increasing or decreasing the pressure applied to the pedal.

That price includes Government incentive: plug-in grant of 35 per cent up to maximum of £4,500 and £55 Government first registration fee