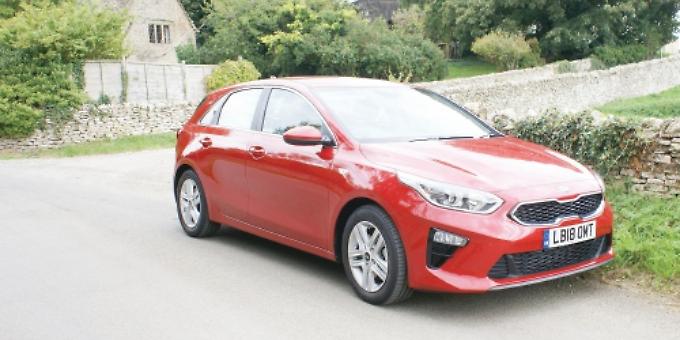 IT seems that the poor old apostrophe — which, let’s face it, continues to take more than its fair share of a grammatical bashing these days — has finally been dropped by Kia for what was its rather exotic-sounding cee’d hatchback.

So all those who took a few goes to get our pens around the cee’d — all lower case plus apostrophe — when it emerged in 2006, can now relax.

A new naming format for the latest generation car means that cee’d becomes Ceed — and that’s official from the South Korean carmaker.

Kia says that the name change “consolidates” the hatchback’s reputation as a “car for the Community of Europe, with European Design”.

So that’s what European thinking is all about. Us Brits could be forgiven for not understanding the thinking there, especially as we seem currently to be dazed and confused by Brexit.

But enough of the B-word — isn’t it becoming anathema to many of us as much as the C-word — Christmas that is – when to mention the latter in early autumn seems a couple of months premature?

Anyway, I digress. What’s important to Kia is that as the Ceed enters its third iteration, this model is expected to account for an even greater proportion of Kia’s European sales.

Kia does not seem to have put a foot wrong in the past decade, so there should be no reason why taking the apostrophe out of Ceed and dispensing with the insistence on it all being lowercase should not, er, succeed. (There’s actually a car from Kia called the ProCeed, but more of that later.)

Seriously, because the multi-billion-pound global car-making business deserves to be taken seriously, the Ceed is a great contender in its market segment.

It has the antecedents — pun not intended — even though it is still a relatively young model.

Since the first-generation Kia cee’d started production at Kia’s new Slovakian manufacturing facility in December 2006, more than 1.3 million units have been built.

More than 660,000 of the second-generation model have been built since production began in 2012.

So what do you get in the all-new 2018-19 Kia Ceed? Well, apart from the name update there is an abundance of new technology. All engines meet the latest Euro-6d-Temp emissions regulations, there are new safety and advanced driver assistance systems in place, and the new Ceed is the first Kia to offer Lane Following Assist technology.

LFA detects road markings to keep the car in the centre of its lane on the motorway, and controls acceleration, braking and steering.

The system uses external sensors to maintain a safe distance from the vehicle in front, operating between 0 and 81mph.

There are 11 versions of the Ceed, based on four trim levels. All models are front-wheel-drive and feature a practical five-door hatchback body style.

This car is the first of a whole all-new family of Ceed models due to be launched over the next two years.

This week I have been driving the Kia Ceed 1.6 CRDi “2”. This had excellent power source and punch and great handling: it was an easy and accomplished car to drive and live with.

The “Blue Edition” is sold exclusively with the 138bhp 1.4-litre T-GDi direct-injection petrol engine with a choice of six-speed manual or 7DCT gearbox. Move up to “3” specification and it is offered with the full range of Ceed engines, including the 118bhp 1.0-litre and 138bhp 1.4-litre T-GDi petrol engines and the 114bhp 1.6-litre CRDi diesel unit.

Both the more powerful petrol and the diesel engine can be specified with either a six-speed manual or 7DCT gearbox.

At the top of the Ceed range is the “First Edition”, which is paired to the 138bhp 1.4-litre T-GDi direct-injection petrol engine and offered with either a six-speed manual or 7DCT gearbox.

And the new ProCeed?

Emilio Herrera, chief operating officer for Kia Motors Europe, says: “The ProCeed takes the Ceed model family in a bold new direction. Where the Ceed Sportswagon majors on practicality, the ProCeed provides couples or young families with the space and versatility of a wagon, combined with an emotive, swept-back design. Where focusing on one of these normally compromises the other, the ProCeed is the first car in the mainstream segment to combine both.”

The all-new Kia ProCeed merges design with the space and versatility of a tourer in a five-door shooting brake body.

The ProCeed is currently making its public debut at the 2018 Paris Motor Show, before going on sale exclusively to European drivers at the beginning of 2019.

• USB & AUX ports for connection of a media device