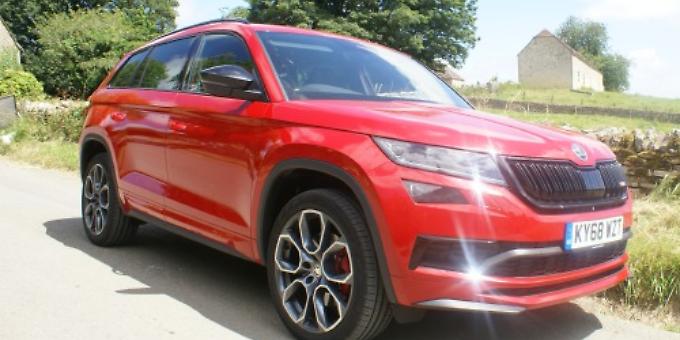 ONCE upon a time there was a rather nippy Škoda that some said was a 4x4 GTi in disguise.

Unfortunately, the charmingly named Škoda Yeti is no longer being made.

They also no longer give cars names like Yeti, which I always thought showed a welcome sense of humour.

Anyway, this week I have been driving a model in the Škoda stable that had all the attributes of a GTi — performance, looks — and was a 4x4. Oh, and it also had seven seats.

This was the engine-throbbing Škoda Kodiaq vRS, whose guttural power just about blew me away. I am a sucker for that burbling sound of a powerful engine.

Indeed, Škoda describes the Kodiaq vRS as a “celebration of power” and I can see why.

The vRS tag stands for “victory racing sport” and the RS initials themselves have a long history in motorsport.

Kodiaq being the biggest beast in the Škoda model line-up, the Kodiaq vRS makes a lot of sense to those who want a big SUV (sport utility vehicle) without sacrificing performance, power and interior space.

Performance first, because when you start up the Kodiaq vRS, you know it means business.

Its 2.0 TDI (diesel) engine — itself the most powerful production diesel engine in the Czech carmaker’s history — produces 240PS, which is roughly in old money 237 bhp (brake horse power). So at start up, the Kodiaq vRS growls at you in the nicest possible way.

This large SUV can whisk you up to 62mph in seven seconds (not bad for a big car) and plough on (where possible) to a maximum speed of 136mph.

But what I really liked about this car was that it had the lively, agile handling and willingness to move I recall in the Yeti (which ceased to be in 2017). There was a Yeti Xtreme concept, a small rally-prepared crossover that was beefed up with chunky all-terrain tyres, large wheel arches and an adjustable chassis set-up fit for off-road use. Ah, happy days. The new Kodiaq vRS looks the part, too. It sports 20-inch Xtreme anthracite alloy wheels, unique sports front and rear bumpers, and duel exhaust pipes, and the Velvet Red metallic colour of the test car all add up to a chunky road-ready stance. The interior of the car is pitched towards the sporty, with black Alcantara sports seats with red diamond stitching and a graphically distinct virtual cockpit comprising a 10.25in digital display and simple speedometer and RPM dials.

All this good design is backed up by some tasty options available on the Kodiaq vRS, including a panoramic roof which is electrically adjustable and opens at the touch of a button.

There is also a 360-degree area view camera available, which transmits in real time to the infotainment display to aid parking or manoeuvring the vehicle, assisted by front and rear parking sensors.

For those who like good sounds, the Canton sound system on the Kodiaq vRS delivers 575 watts through 10 speakers around the car.

For interior comfort there is a tri-zone climate control system that allows three autonomous thermal comfort zones to be set: driver, front passenger and rear passengers.

Something called the “virtual pedal” is also available on the Kodiaq vRS. You swipe your foot underneath the luggage compartment to automatically open the door. Škoda calls this the Kick Activation (Virtual Pedal) which only works when it detects that the driver’s ignition keys are in range.

There is also the ability of this car to carry seven people, which has to be a plus for anyone who wishes to combine busy family life with performance.

So this vibrant car — the red of the test car of course adds to its vibrancy and the Kodiaq vRS is also available in Race Blue — fulfils a range of wishes for the driver who likes performance, comfort and space.

A word about the DSG transmission fitted on this car: the direct shift gearbox is one of the great improvements in automatic transmission in recent years. Not only is the DSG said to reduce the strain on an engine, it delivers gear changes smoothly and efficiently when necessary.

An SUV with this kind of powerbase may not be for everyone, as a common function of the large SUV — as it was with the people carrier before it — is to deliver efficiently on the everyday tasks, such as the school run or shopping.

However, if you like driving something sporty with plenty of charisma at a good price, then the Kodiaq vRS could be for you.