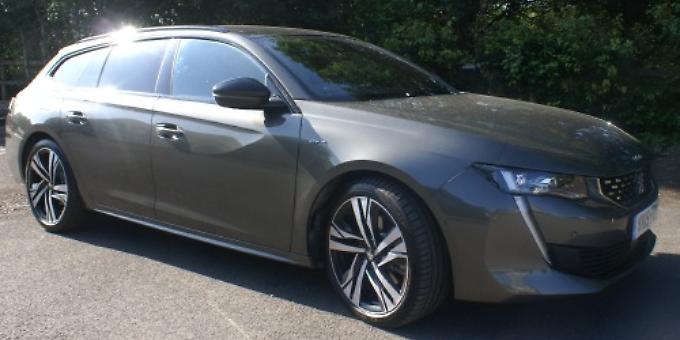 THE all-new Peugeot 508 SW was unveiled to acclaim at the Paris Motor Show and became available to buy in Britain from the beginning of this year.

Part of that universal praise for this car has to be its looks. This handsome design employs new, innovative features such as frameless doors to enhance the sleek effect.

During my time with the car this week it has proved to be an instant turner of heads. This is no mean feat because so many modern cars frankly aspire to a similar, ineffectual bland design.

I really liked the new Peugeot 508 saloon version I wrote about earlier but this 508 SW goes a step further in being pleasing on the eye.

In the highly competitive D-segment estate car market I am sure the 508 SW will do well because as Peugeot claims, the car does bring “radical new styling” to the segment.

One of the noticeable features is that this car is not oversized. Quite the opposite. It is 1.42 metres high and 4.78 metres long. This enables smooth design lines and a low roof.

On exterior details the frameless doors are an unusual estate car feature for a mainstream carmaker, with full LED headlights and opalescent LED daytime running lights adding to the look.

The sum total of this endeavour is that the new 508 SW has overall a pleasing appearance that any motorist could live with. The interior features wrap-around seats offering five multi-point massage programmes, a range of premium trim and upholstery materials and a panoramic opening glass roof.

With the aid of something called the Magic Flat function, the owner can fold back two sides of the rear bench seat boosting a total load space capacity of 1,780 litres.

Of this, 530 litres of space comes from the boot (with luggage cover closed), designed to be simple in shape and practical, with a hands-free, powered tailgate.

These powered tailgates are becoming more popular and I think this is a good thing. The powered tailgate on the 508 SW was endlessly useful when approaching with weighty bags of shopping and the like.

High tech equipment stares at the driver as he takes the wheel: alongside the latest generation Peugoet i-Cockpit, providing all the information essential for the road ahead, is a top-of-the-range in-car 10 loud-speaker sound system.

MirrorLink with Apple CarPlay and Android Auto is also included as standard in every model.

New features for the range include Adaptive Cruise Control with Stop & Go function, Lane Keeping Assist and a Night Vision system. This safety system utilises an infra-red camera to detect humans or animals in front of the vehicle at night time or in low-visibility conditions.

In ECO mode, when twinned with the EAT8 gearbox, the PureTech engine automatically switches to freewheeling mode.

This function, available between 25km/h (15mph) and 130km/h (80mph), eases internal friction in the gearbox and reduces fuel consumption by around three per cent.

Coming in October is a 225hp PHEV version, providing power to the front wheels using 1.6-litre PureTech 180 engine and a 110hp electric motor. The batteries will be located under the row two seats to preserve room in the boot.

The car comes in Active, Allure, GT Line, GT, and for a limited-number only, First Edition, trims.

In Allure trim (and standard on all petrol versions), the all-new 508 SW gets Active Suspension, plus Active Blind Spot Detection and Peugeot Smartbeam Assistance, as well as Open and Go (keyless entry and push button start).