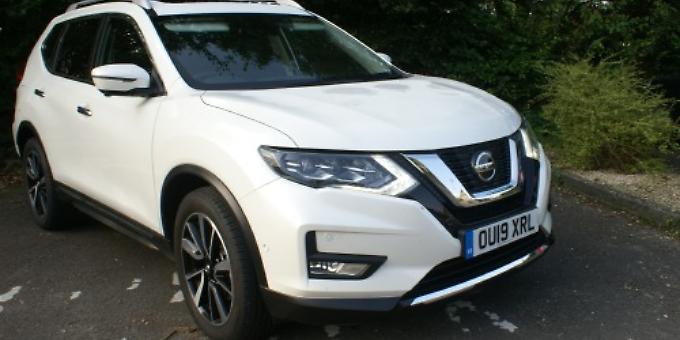 A BRAVE new world of motoring is on the horizon, spearheaded by all-electric vehicles and autonomous driving technology.

Meanwhile, the most dominant form of car today seems to be the SUV (sport utility vehicle) with carmakers bringing to the fore “families” of SUVs in their production line-up.

Nissan is no exception to this trend. The X-Trail is the Japanese carmaker’s best-selling model worldwide. What’s more, Nissan’s global crossover and SUV sales increased by more than 12 per cent in 2017.

The “old” X-Trail was a firm favourite and a hard act to follow. But as with the wonders Nissan has worked by reinventing the marvellous little Micra, so too the 2019 X-Trail I have been driving this week displays great reinvention in design.

The X-Trail is of course available with automatic transmission. I have been driving a 1.7 dCi 150 4WD — which is probably better with the manual gearbox if you intend to go off-road, though I have nothing against going off-road with an automatic gearbox.

Customers have the choice of petrol or high- and low-powered diesel, six-speed manual or CVT XTronic automatic transmissions, and two- or four-wheel drive.

This 1.7 dCi engine has plenty of “grunt” — lots of torque for a reasonably sized engine, so it would be happy trails off-roading in this car.

But I think principally the X-Trail is a great family SUV and of course that’s why it is so popular worldwide.

The new X-Trail, available in five- or seven-seat versions even has an innovative bit of technology that comes into play during one of this car’s most practical uses — a trip to the supermarket.

The two highest grades of X-Trail have previously come with an electric tailgate as standard. This feature has been enhanced on the new X-Trail with the addition of hands-free functionality.

Customers with shopping bags or holding young children close by can now kick their foot under the centre of the car’s rear bumper to automatically activate the tailgate’s opening mechanism.

I do like Nissan’s audio technology, which seems throughout the model range to include the ubiquitous (and essential on my part) CD player.

Actually, the new X-Trail Tekna grade which I have been driving was also fitted with an all-new eight-speaker sound system as standard.

This Bose unit features two 25mm tweeters at the base of the windscreen, a 165mm woofer in each front door and a 130mm mid-range speaker in each rear door.

Two 115mm woofers are housed in a 7.7-litre custom-engineered enclosure mounted in the spare wheel well. A Bose digital amplifier with eight channels of custom equalisation and digital signal processing is mounted under the passenger seat.

So if, like me, you like music (and good radio) wherever you go, this Bose technology on the X-Trail has to be one of the best.

The X-Trail is available with ProPilot autonomous drive technology. ProPilot controls the steering, acceleration and braking in a single lane on the road during heavy traffic congestion and high-speed cruising.

Intuitive to use, ProPilot is activated via a button on the X-Trail’s steering wheel. Information is displayed between the instrument dials. DAB digital radio is now standard for the first time, while the NissanConnect touch-screen satellite navigation unit (standard from
N-Connecta, optional on Acenta grades) features a smart new user interface that’s more app-like in appearance.

Where the NissanConnect system is fitted, the X-Trail now features a “shark fin” type roof antenna for improved reception and more contemporary styling.

The boot on the new X-Trail is larger than before — up from 550 litres to 565 litres on the five-seat version with all seats in place.

Capacity on seven-seat interiors (445 litres) remains unchanged. Total space with all seats folded flat has been increased to 1,996 litres.

Every X-Trail boot comes with Nissan’s Flexible Luggage Board System, which allows for shelves and dividers to be adjusted in any one of nine configurations. These include a hidden compartment to keep valuables out of sight.

New Nissan Intelligent Mobility technologies have been added to the X-Trail.

Rear Cross Traffic Alert, to mitigate the risk of low-speed impacts when reversing out of a parking space, is available. If the driver attempts to reverse when an approaching vehicle is detected, the system gives visual and audible warnings.

Intelligent Emergency Braking has been on the
X-Trail since 2014, but has been upgraded with Pedestrian Recognition.

This technology helps to minimise collisions with pedestrians using a combination of forward-facing radar and camera.

The X-Trail is an excellent all-rounder at a very good price with this new generation a triumph of reinvention.