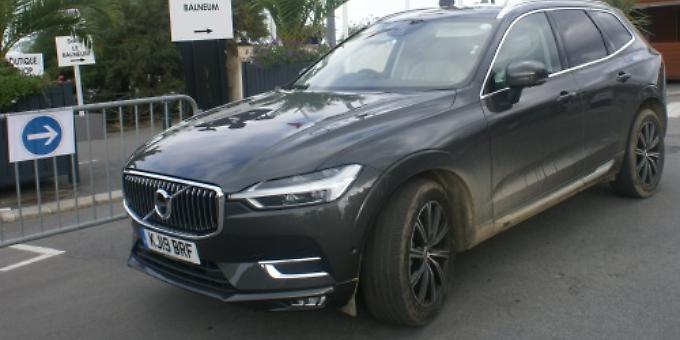 THERE is a part of France that will remain forever British whatever the end of the month of October brings for us all.

Having just celebrated its 30th anniversary, the Dinard Festival of British Cinema was in full swing when we rolled into town recently in a Volvo XC60 — the Swedish carmaker’s five-door, five-seat mid-size SUV (sport utility vehicle).

I believe that this particular film festival, which attracts many British visitors as well as legions of French movie fans, will be going strong for lots more years to come. And I look forward to the prospect.

Whatever the politicians carve out for our lives after October 31, I know that diehard Francophiles such as myself will find a way to go on enjoying our annual slice of authentic French life. Long may it remain so.

It was early morning and we had just arrived in France in Brittany Ferries’ flagship ferry Bretagne after an overnight crossing from Portsmouth to Saint-Malo.

Indeed, Brittany Ferries gives motorists the widest choice of cross-Channel ferries from the UK ferry ports of Portsmouth, Poole and Plymouth. The firm says Bretagne holds a “special place” on its fleet, being the namesake of the company’s heritage.

For me, Portsmouth to Saint-Malo has to be the best motorists’ route into France: dinner in the Bretagne’s plush restaurant, a choice of on-board entertainment and café service and a full night’s sleep in a cabin. This way you wake up refreshed for any upcoming drive — short or long — across France.

There were all kinds of vehicles and motorists on the ferry. Some had already driven miles from all points in Britain to get to Portsmouth. Some motorists faced hundreds of kilometres of driving ahead of them on the other side of the Channel. So what better way to prepare yourself for the road ahead on French/Spanish/Italian soil than a crossing that allows you to rest up for the night?

Car owners will always argue over space. Is their car big enough to take to the Continent, fully laden with holiday luggage, when for the rest of the year, the vehicle is used for school runs and shopping expeditions?

The answer for us this time around was that the XC60, a second generation SUV that has quickly become the best-selling model in Volvo’s range, proved to be spacious, safe and comfortable. There were three adults travelling in the XC60 with enough personal luggage each, including bedding, for a full week’s stay.

The XC60 easily swallowed up the numerous bags, including carry-on essentials for the overnight boat trip.

Once in Dinard, we encountered signs of the British way of life at every turn. The Union Jack was displayed on bunting and posters.

There were images of the late great British film director Alfred Hitchcock — his portly black silhouette is the festival’s enduring emblem. A fine statue in his honour dominates the promenade at Dinard.

But this was no hardship. The coast road is a delight and takes in towns and villages that includes Saint-Lunaire and Saint-Enogat, a great drive in the XC60.

I cannot recommend the Emerald Coast in Northern Brittany enough for drivers. You can explore right the way along the coast, going west, all the way to Brest if you have time.

Ours was limited so we enjoyed instead the local haunts that we have come to know and love.

In the XC60 the passing of time driving was a pleasure. The XC60 Inscription Automatic T5 petrol-driven version I was driving had plenty of torque and great acceleration for such a large car.

But the XC60 was equally happy at low speeds, cruising effortlessly along the coast road while we took in the sights.

The XC60 is powered by Volvo’s Drive-E powertrains, including petrol, diesel and Volvo’s T8 Twin Engine, a petrol plug-in hybrid mated to an eight-speed automatic transmission.

The XC60 also introduces Volvo’s advanced kinetic energy recovery braking system, which is coupled with its existing internal combustion engines to create a new integrated electrified powertrain, under its new B badge.

Customers can choose between a B5 mild hybrid petrol or diesel variant, a B4 diesel mild hybrid as well as a B6 petrol mild hybrid. The B5 petrol is available with front wheel drive or all-wheel drive.

I hope to test those versions on the XC60 in the weeks to come and report back.

• For more information on Channel crossings with Brittany Ferries, visit the firm online at www.brittany-ferries.co.uk