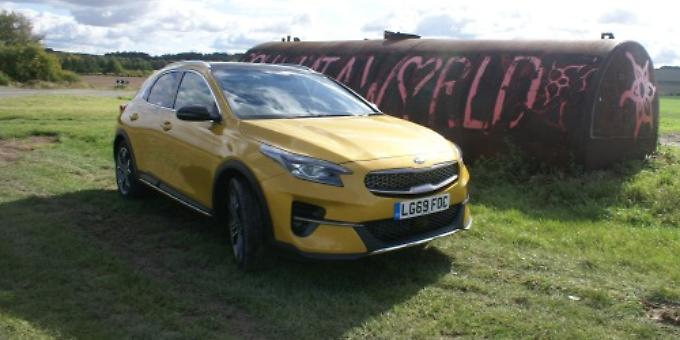 ANY motorist could be forgiven these days for stumbling through the various acronyms used to describe a car’s functioning parts (as well as types of vehicles).

But bear with, as they say, because the serious intent of carmakers — apart from the obvious one of selling you a new motor car — is to get you into the right type of vehicle to suit your lifestyle.

The all-new Kia XCeed is an urban crossover utility vehicle (CUV), which according to its makers “combines compact SUV practicality with the sporty packaging and engaging handling of a hatchback”.

I’ll let you be the judge of that when you come to take one for a test drive. As always, my advice when considering buying any new car is simply to get in and drive it at every opportunity before you part with your cash.

I liked the way this new CUV handled, the large touchscreen with its easy-on-the-eye graphics, the interior space and driver-friendly handling of the car. And to my surprise it was the XCeed version with a smaller engine that I preferred on first drive.

What follows is a first look report on the all-new Kia XCeed and I hope to bring you a fuller review on the range on offer in due course.

Emilio Herrera, chief operating officer for Kia Motors Europe, says that by merging the strengths of both hatchback and SUV, the Kia XCeed “offers something refreshing and different for European consumers”. Herrera goes on to say that the C-segment is the second largest class in the European market, and, thanks to a broadening range of body types, is set to take on greater importance in the years ahead.

He adds that the expanded Ceed range — that is, including the new XCeed — now offers buyers “more choice in this class than almost any other manufacturer”.

At first, you might wonder what the difference is between this car and any other car in the segment.

An SUV it certainly is not, but as you drive it you realise what this crossover urban utility vehicle is all about. I think this has something to do with the flexibility of the range of engines on offer. So if you do venture out for a test drive, make sure you understand what power plants are on offer and which might best suit you.

The XCeed is also available with a choice of two Smartstream power units — the cleanest diesel engines ever produced by the brand, says Kia, and the most fuel-efficient in the range.

All engines are paired with a six-speed manual gearbox, with the 1.4 T-GDi unit optionally available with a seven-speed dual-clutch auto transmission. Intelligent Stop & Go is fitted as standard to all models.

The 1.0-litre T-GDi engine fits in perfectly with Kia's downsizing strategy by delivering exceptional power and torque from only three cylinders and a cubic capacity of just 998cc, thanks to turbocharging and direct injection.

I like the latter engine a lot and I like the idea that cleaner, smaller engines are being utilised that offer the customer a greener option without compromising on power.

• Among the most high-tech cars in its class