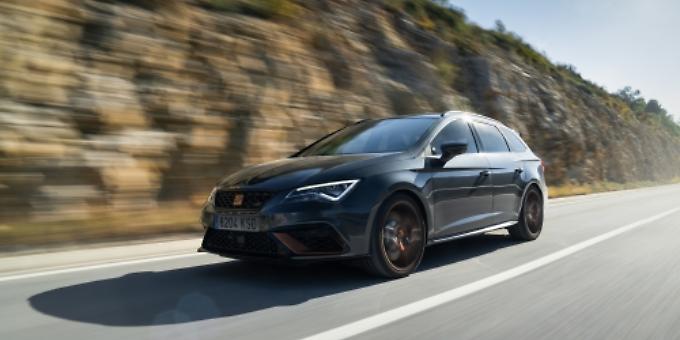 THE great thing about the Seat Leon Cupra R Estate was that it turned out to be not at all how you imagined an estate car should be.

For this estate car had blistering performance, great light-of-touch handling and a fabulous engine.

It was a limited edition, smartly turned out in the brilliantly named metallic Blackness Grey livery, so it was more than a bit special.

Only 150 of the Seat Leon Cupra R Estate special editions were made available for the UK market.

The car has a 2.0 TSI 300PS engine but for £500 customers can upgrade to 350PS with the addition of an ABT tuning pack, which was fitted to the test car I was driving. This rates a 0 to 62mph performance figure of 4.5 seconds.

What more could you want from a car? Or an estate, come to that? Well, it so happens that with the Leon Cupra R Estate you also get that all-important ingredient of added space.

While SUVs (sport utility vehicles), hatchbacks, and crossovers are the modern cars of choice, the actual term “estate car” harks back to the early days of car production.

The definition of an estate car is a vehicle with a large carrying area behind the seats, accessed by a door at the rear.

In the United States they are known as station wagons and were first produced in around 1910.

This Seat Leon Cupra R Estate proves that the model variant is still going strong in 2019 with added zest.

I think the estate car will be like the printed book. There has been a digital assault on its very being. Yet a lot of people still prefer to read books printed on paper with covers.

The same can be said of estate cars, especially ones like the Leon Cupra R Estate that also has great driving potential.

One reason for the continuing popularity of the estate is that the two-box design, which incorporates a large cargo area and a rear tailgate that is hinged to open for access is unlikely ever to go out of fashion simply because it is so useful.

But the bonus to this usefulness with the Leon Cupra R Estate was that it had an engine with exceptional 350PS output.

With high specification as standard, this limited edition looked the part with quad exhaust, Brembo brakes, bucket seats and a panoramic sunroof. Copper accents and carbon fibre detailing added to the appeal.

This model brings together the high performance of its remarkable engine with the superb traction of its 4Drive system.

So the Leon Cupra R Estate strikes a great balance between performance, comfort, and a body style that adds practicality.

The highly tuned turbocharged, direct-injection petrol engine is linked to a seven-speed DSG transmission — a favourite automatic transmission of mine. So smooth. The Leon Cupra R Estate’s choices of colours, other than Blackness Grey, are Magnetic Tech, Midnight Black and Nevada White.

The car had 19in alloy rims with copper hubcaps, which frame the front Brembo brakes — another hint as to its overall performance.

Inside there are illuminated aluminium plaques and the interior lining of the doors is finished in fabric with carbon fibre look.

Both driver and front passenger are provided with sports bucket seats for comfort on longer journeys and security for a fast driving style.

There is on the central console an eight-inch colour screen. Once moving, the driver is given information and driving data from the “Digital Cockpit”.

Keyless entry and front and rear view cameras are included as standard and integration of the latest connectivity suite. Drivers can link their mobile devices to the car and benefit from selected apps and increased functionality.

Antonino Labate, director of Cupra strategy, business development and operations, said: “The Seat Leon Cupra R Estate represents our ability to make unique, exciting cars with the most advanced technology ready for the most demanding and diverse of drivers.”

Some might argue that you do not need this kind of performance from any road-going car on today’s congested roads. There might be an argument for that. But this car requires discipline from its driver — in a similar way that any high-performance motorcycle requires great control to enjoy properly.

If you like driving, then as I did you will appreciate the great ease of passage of this brilliant estate.