‘Small is beautiful’ when it comes to little luxuries 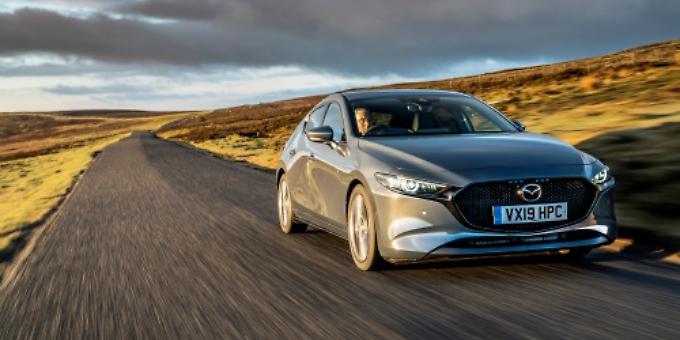 THE Mazda3 is a car that in many ways fulfils the criteria I have been writing about in recent years with regard to smaller, modern cars.

I have said many times that I do not see why smaller cars cannot have all the “perks” of larger, so-called prestige models.

To name a few, the Mazda3 I have been driving this week had among other features a luxurious interior with comfortable seats, therefore creating the kind of cosy cabin “feel” you get in larger cars, and even a heated steering wheel.

True, the version I was driving was the Mazda3 2.0 180ps GT Sport Tech AWD. so it fulfilled the criteria of “high spec” with some ease.

But the car dismissed the rather outdated notion that if you wish to own a “luxury” car it has to be one that is large and often cumbersome.

The equipment levels for the new Mazda3 are excellent. GT Sport and GT Sport Tech versions of the all-new Mazda3 feature black leather seats, while the driver’s seat features power adjustment and memory function linked to the Active Driving Display and door mirror.

You also get a 12-speaker Bose surround sound system. Manual air-conditioning is standard on the
SE-L and Sport, while from the
SE-L Lux onwards dual-zone climate control is included, as are heated seats. GT Sport and GT Sport Tech cars have a heated steering wheel.

All versions of the Mazda3 feature a seven-inch TFT colour instrument display combined with an 8.8-inch central display screen with Mazda Connect infotainment. Apple CarPlay and Android Auto are standard across the range. USB connectivity and Bluetooth is also standard.

Another technical feature I have found useful — usually in more expensive and bigger cars — is something called a windscreen projected colour head-up display. This gives information including the vehicle’s speed, which reminds the driver of restrictions — something that is important these days.

Mazda Radar Cruise Control also features on every car in the range. On models with an automatic gearbox the stop and go function allows the car to come to a complete stop and move off again in crawling traffic.

Of course, with a smaller car you do naturally get reduced cabin space compared to that in prestige cars. But if the design is right, it can work well.

As I have said, the cabin on the Mazda3 was compact and cosy. My only grumble on a longish drive was the slight intrusion to my left leg from the gearbox tunnel housing.

Interior space is helped by the fact that all versions of the Mazda3 feature 60:40 split rear seats. The boot of the hatchback delivers 351 litres of luggage space — or 358 litres if you include the additional space under the boot floor.

Fold the rear seats flat and load to the roof and this practical hatchback has a 1,026-litre carry space, while maximum load length increases from 838mm to 1,366mm. The Mazda3 Saloon has a 444-litre load space.

I like the screen graphics of the navigation system. The Mazda3 features a 3D gyro sensor with optimised control logic that calculates car position even when there’s no GPS signal.

Additionally, the quality and draw-up speed of the mapping has improved on the previous model, and Mazda says the new search functionality has also been enhanced.

Apple CarPlay and Android Auto allows for the easy use of smartphone online navigation applications.

Mazda is keen not to abandon the internal combustion engine just yet. But the Japanese car maker says it will work continually to improve the combustion efficiency and performance of its engines.

So its engineers will gradually integrate electric drive technologies, such as the mild hybrid system used by the Mazda3’s Skyactiv-G 2.0 engine and Skyactiv-X engine.

Mazda says of the Mazda M Hybrid system that it not only enhances the car’s environmental performance but also ensures better driveability.

Whatever the future holds for smaller cars, be they hybrids or all-electric or even powered by more sophisticated forms of the internal combustion engine, cars such as the Mazda3, with “prestige” goodies included, point to the fact that in future small has still got to be beautiful.

• Choice of automatic or manual transmission available on all models

SEAT got off to a great start to the New Year when this week’s drive, the Leon, won one of the most ... [more]

Trending in new car sales, as they might say on social media, for some time now has been the ... [more]

THE new Seat Leon has been voted Autobest 2021, the European accolade for the Best Buy Car of ... [more]