New-look A5 still has sporting bias built in 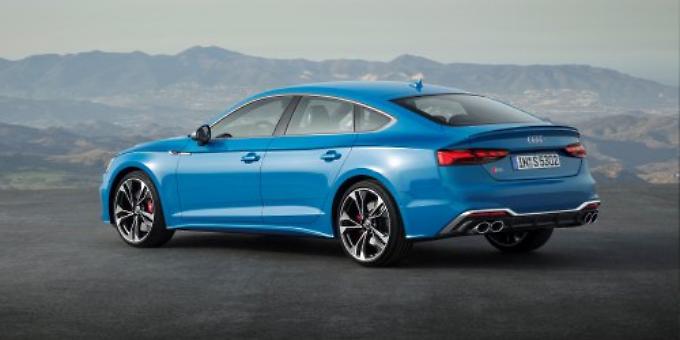 AUDI is moving at a pace into 2020 with upgrades to the popular A5 range — the Audi A5 Sportback, A5 Coupé and A5 Cabriolet.

This week’s drive, the A5 Sportback 40 TDI quattro Black Edition S tronic, displayed all the attributes of a car that is seriously moving with the times.

So, the A5 range has a new look, new mild hybrid drivetrains and the latest MMI touch-operating concept.

For example, at the top of the Coupé and Sportback line-up, new S5 variants come on stream using TDI power for the first time.

This is combined with an electric powered compressor and mild hybrid drive based around a 48-volt main electrical system.

The updated Audi A5’s exterior has been “significantly revised”, particularly the front end.

The honeycomb grille is wider and flatter, and above it ventilation slits reference the classic Audi Sport quattro from 1984.

New car buyers will have a choice of 12 paint finishes for the A5, including a new, metallic shade district green.

All body and engine variants in the A5 product line will come with LED headlights as standard equipment.

As always with new Audis, the car I have been driving was bristling with new technology — a definite sign of even finer things to come as we race into 2020.

It was comfortable and quick and assured on the road and its technological equipment was first rate.

There was a large MMI touch display, the control centre of the new operating system, and the focal point of the instrument panel.

Based on the third-generation modular infotainment platform MIB 3, it offers a user experience similar to a smartphone via a 10.1-inch touch display with acoustic feedback, which replaces the rotary pushbutton used in previous models. With clear graphics its MMI search function is based on free text input and rapidly returns relevant hits; it also responds via natural-language voice control.

The top of the line MMI navigation plus infotainment control centre will be a standard feature of all A5 models in the UK.

Its new functions make navigation more straightforward, says Audi, including the ability to suggest routes based on routes previously driven.

The Audi connect plus portfolio includes a host of additional Car-to-X services, taking advantage of the swarm intelligence of the Audi fleet.

They include online traffic sign and hazard information, an on-street parking search function and newly introduced traffic light information functionality. It connects the car to the city’s central computer that controls the traffic lights.

The all-digital Audi virtual cockpit plus is another standard feature of the latest UK A5 models that underscores their impressive technological emphasis. The driver can operate the 12.3-inch display with full HD resolution using the multifunction steering wheel with a choice of three views.

A head-up display that projects important information into the driver’s direct field of view is also optionally available.

The updated Audi A5 models will be available in Europe with a range of TFSI and TDI engines with outputs ranging from 163PS to 347PS. Four A5 engine variants will be equipped with a mild hybrid system (MHEV). A belt alternator starter, which is connected to the crankshaft, recovers energy during deceleration and stores this in a compact lithium-ion battery.

All A5 models are equipped with an automatic transmission, either a seven-speed S tronic or an eight-speed tiptronic. The three most powerful engines in the range work with quattro drive as standard and the system is also available as an option for the mid-range units.

The suspension in all A5 models has been tuned with an underlying emphasis on comfort but also an appropriately sporting bias.

• New look A5 Sportback, Coupé and Cabriolet models for 2020

Important please: car tested is the A5 Sportback but pix are of the Audi S5 Sportback. So copy is good to go as it is but in captions on pix if you could please refer to cars in pix as Audi S5 Sportback. In essence the story is that the Audi A5 range (which includes S5 Sportback) has new look/technologies etc for 2020. Thank you.