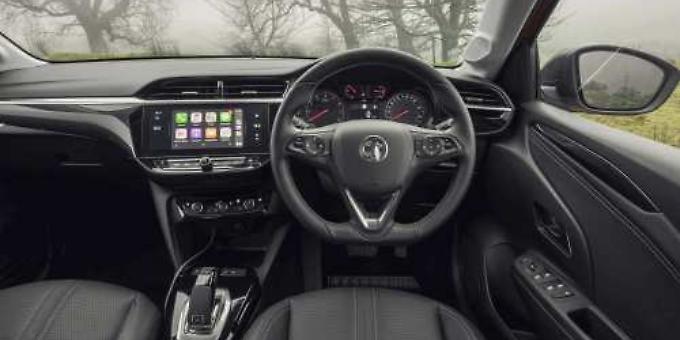 IT’S enough to make even the most hardened of motorists go misty-eyed with nostalgia.

Vauxhall, one of the oldest established carmakers in Britain, has come out fighting in 2020 for its place in one of the world’s toughest car marketplaces.

Nowhere is this determination more evident than in this week’s drive, the all-new fifth-generation Vauxhall Corsa.

This model has been a truly popular car of the people, with more than 2.1 million Corsas sold in the UK since the model’s launch back in 1993.

Indeed, the Corsa has been as favoured down the years in Europe where it has sold more than 13.5 million cars.

To give the brand credit — and its new owners, the French carmaker Peugeot — Vauxhall has dusted itself off for a 21st century style bid for its place in the global market.

So the new Corsa comes to you in all forms — with a choice of fully electric, petrol or diesel powertrains.

Like half the nation in the early part of a new year, the Corsa has been slimming.

Vauxhall says the new Corsa has undergone “a significant weight loss”, with the new model weighing in from 980kg — 108kg less than the outgoing model.

What does that mean? Vauxhall says this new lightness of being means the new Corsa benefits from better performance and handling, and increased efficiency, whatever its power source.

I have to say that after spending some time with the 2020 Corsa that I think improvements to the car are palpable. I only have one reservation — an old hobbyhorse of mine where smaller Vauxhall cars are concerned. I have always had a problem with the seats.

I would still like to see an improvement in comfort — that is, lumbar support and general padding — especially with a view to long journeys.

That said, this new car acquitted itself well, with all-round handling and performance much improved with this lighter design. I also liked the gearshift on the manual version I have been driving and the willing performance of its 1.5-litre diesel engine.

Vauxhalls have always been good in the engine department and the new Corsa is no exception.

Like many other carmakers, Vauxhall is launching itself full throttle into the world of electric cars.

There is the all-electric Corsa-e — the first-ever electric Corsa — which I hope to review shortly. Vauxhall is committed to delivering eight electrified models by 2021 and electrifying its “entire product portfolio by 2024”.

The Corsa has numerous advanced driver assistance systems such as Lane Keep Assist, appearing for the first time in the Corsa, which applies gradual corrective steering and a gentle nudge if the car unintentionally leaves its lane. A lane departure warning also shows in the driver info centre, above the steering wheel.

Driver Drowsiness System also comes as standard. This warns the driver, via audio and visual signals, to take a break after two hours of driving at speeds higher than 40mph.

The system also alerts the driver to the need for a break at any time if it detects that the car is behaving dangerously, such as swerving.

Side Blind Spot Alert uses ultrasonic sensors in the front and rear bumpers to alert the driver to any moving objects in the blind spots on either side of the car, as well as towards the rear.

I know some drivers who view this as “nannying” the motorist, but with driving becoming much more hazardous through carelessness and general fatigue, I think we need all the help we can get from technology.

The multimedia system is compatible with Android Auto and Apple CarPlay, and feature control via integrated voice recognition.

Vauxhall Connect, at the touch of a button, puts the driver in touch with an adviser in the event of an emergency or breakdown, while impact detection activates an e-Call automatically.

The light beam continuously adapts to the traffic and the surroundings to ensure optimum output without dazzling.

• Battery electric Corsa-e has a range of 205 miles

• Multimedia systems with up to 10in touchscreen