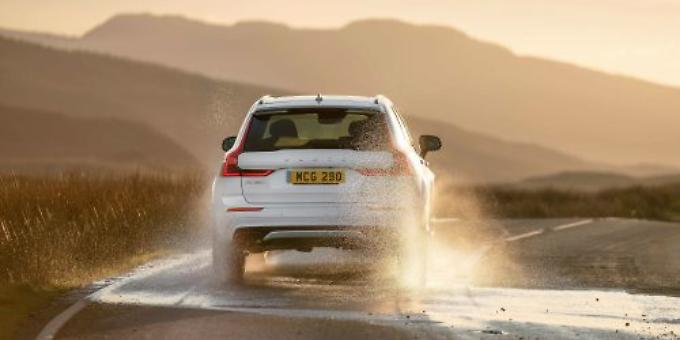 A MYRIAD and sometimes mystifying choice of engines, body and interior specifications is on offer to new car buyers today.

The emphasis now of course is on sales of all-electric cars. This has been given fresh impetus by the Green Alliance think tank’s suggestion that the 2040 ban on new diesel and petrol car sales be brought forward by a decade.

Meanwhile, back in the 2020 world of cars, this week I have been driving a Volvo XC60 SUV (sport utility vehicle) powered by one of a new mild-hybrid range of engines.

It has a diesel designated B5, combines an established 2.0-litre 235hp diesel engine with a 48-volt battery, a “kinetic energy recovery system” and an integrated starter generator. Volvo says the system improves fuel economy by up to 15 per cent in “real-world driving” terms and produces lower NOx emissions.

The XC60 — perhaps my favourite size of SUV from the Volvo stable — is powered by Drive-E powertrains, including petrol, diesel and T8 Twin Engine, a petrol plug-in hybrid mated to an eight-speed automatic transmission.

The XC60 introduces Volvo’s “advanced kinetic energy recovery braking system”, which is coupled with its existing internal combustion engines to create a new integrated electrified powertrain. In other words, this is probably the best combination you can get while new diesel and petrol engines still exist. Customers can choose between a B5 mild hybrid petrol, or diesel variant, a B4 diesel mild hybrid as well as a B6 petrol mild hybrid. The B5 petrol is available with front wheel drive or all-wheel drive. So you see the choice is wide and wondrous.

I liked the B5 diesel variant because it combined great torque (pulling power) plus smooth cruising ability.

I know diesel is on the back foot but I wonder if the new all-electric engines will be able to replace that great torque-filled power that comes from a large diesel engine and is so handy, for example, for towing caravans and trailers (and economical to run).

We shall see as the all-electric era pans out. The B5 also gets an updated automatic transmission, which brings improved fuel efficiency and better gearshift quality.

Acceleration from a standstill is sharper, too, thanks to a greater torque capacity in the lower gears (and that’s what I really like about diesel cars).

This second generation XC60 has quickly become the best-selling model in Volvo’s range and in common with all new Volvos is “connected”, by Volvo’s connectivity and infotainment system called Sensus.

The portrait-oriented touch screen enables easy and fast access to functions and features. As in the 90 Series cars, smartphone integration with Apple CarPlay and Android Auto is also available.

City Safety technology, standard on all models, combines automatic braking functionality and collision avoidance systems to cover a range of potential accident scenarios and help keep you safe. City Safety is the only system on the market that detects pedestrians, cyclists and large animals such as deer.

The Pilot Assist driver assistance system, optional on the XC60, works up to 130 km/h on clearly marked roads and is another step towards the carmaker’s mission that no one should be killed or seriously injured in a new Volvo by 2020.

The challenges facing the global car market today are as myriad as the engines and vehicle specifications available.

The Swedish carmaker’s stated goal is to “reduce its lifecycle carbon footprint per car by 40 per cent between 2018 and 2025”.

Volvo’s ambition is to become a climate-neutral company by 2040. If anyone can fulfil this kind of commendable and necessary ambition, Volvo can.

Good to be back, says landlord after taking over pub