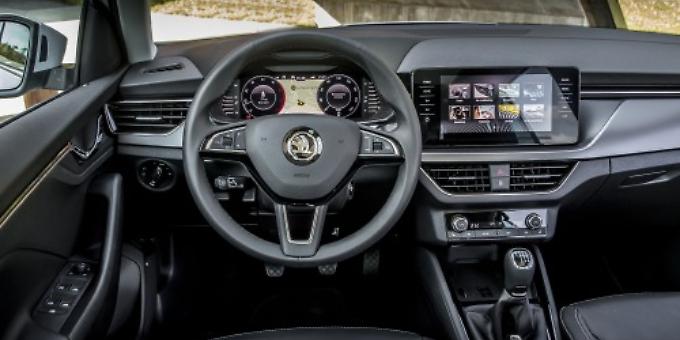 AS challenges to the British economy begin to bite, new car buyers might be setting their sights on smaller more compact models.

The SUV (sport utility vehicle) is an import from the United States but it has proved to be hugely popular in recent years in Britain and Europe.

Most carmakers now have a line-up of large, medium and small SUV models. Škoda, the Czech car manufacturer, is no exception with its range of SUVs.

The all-new 2020 Škoda Kamiq is part of Škoda’s three-model SUV line-up. The other models are the Kodiaq and Karoq.

This week I have been driving the Kamiq SE 1.5 TSI 150PS. With this model you get the attributes of the smaller SUV but with power to match.

This is important whatever car you buy. Often new car owners might be disappointed because they have not checked out the actual performance of the car they are buying.

It’s a simple enough exercise: along with choosing a nice interior, and load space, an essential part of choosing a new car is to be happy with the engine.

This not only applies to the economy of the chosen power plant, but also whether it will perform satisfactorily on motorways and up hills, for example.

The Kamiq, with a 1.5 TSI 150PS petrol engine would probably be my choice if I were buying such a car because of the good balance between power and performance.

You may not want to go from 0-62mph in 8.3 seconds or top out at a speed of 132mph (figures for the 150PS Kamiq) but I found it reassuring that the oomph was there if you I needed it. This does not mean that the Kamiq was all about the engine. What about the name? There are various schools of thought on this. I think I prefer a name to a model rather than a number.

Kamiq comes from the Inuit of Greenland and means something that fits perfectly in every situation — like a second skin.

Handily, Kamiq begins with a “k” and ends in a “q”, therefore continuing the naming style of Škoda’s SUV models.

If a name doesn’t bother you, then what about the technology, which is at the forefront of the mind of most new car buyers?

The Kamiq is “always online”, says Škoda, thanks to a built-in LTE eSIM. This allows navigation to be “subtly and constantly optimised”. Digital assistant Laura responds to voice commands and is also backed by online data — in addition to simple commands, the system also understands natural speech and dialects.

Storage compartments in the Kamiq interior provide 26 litres of space for stowing items. On the issue of storage Škoda has always excelled.

The Kamiq’s cabin can be customised with a range of ambient lighting and decorative trim options.

The engine range consists of four direct injection turbocharged units with outputs ranging from 95PS to 150PS. The three petrol engines have outputs of 95, 115 and 150PS, while the single diesel offering generates 115PS. All but the 95PS engine can be specified with a seven-speed DSG transmission.

The engines fitted in the Scala and Kamiq models are to be converted to the Euro 6d standard. The 1.5 TSI produces 150 PS, while the 1.0 TSI (a favourite engine of mine) is available with outputs of 95 PS, and later in the year with 110 PS.

The optional silver-coloured 17-inch Propus alloys are new (only available for the Kamiq), as is the Simply Clever multifunction pocket underneath the boot cover for extra storage.

In the optional KESSY keyless vehicle entry system, the transmitter signal now deactivates if the key has not been moved for five minutes, instead of the previous 15 minutes.

All Scala and Kamiq models are now equipped with an activated carbon filter that can also remove allergens from the air. The ScoutLine trim is also making its debut on the Kamiq in the UK.

And, by the way: if you are in any doubt of Škoda’s achievement over the past two decades the following is a reassuring fact.

More than 181,000 Auto Trader readers named Škoda as the most dependable brand in the industry, making it the winner of the 2020 Auto Trader Most Reliable Brand trophy.

And for 2021 in Škoda models come new steering wheels, more efficient engines and additional assistance systems are some of the changes as part of model year updates.

The new two- or three-spoke steering wheels from the all-new Octavia — featuring the infotainment operating buttons and knurled wheels — are being introduced across the range.

The Superb, Kodiaq and Karoq will benefit from additional assistance systems, while the Scala and Kamiq compact models are being further refined with subtle details.

Additionally, Fabia and Superb combustion engines will be converted to the Euro 6d emission standard by the end of the year, with some becoming even more powerful.

THIS week I have been driving a car that eclipsed the range anxiety associated with all-electric ... [more]

AS challenges to the British economy begin to bite, new car buyers might be setting their sights on ... [more]

THE Renault Clio has proved itself the ultimate stayer in the hugely competitive world of modern ... [more]