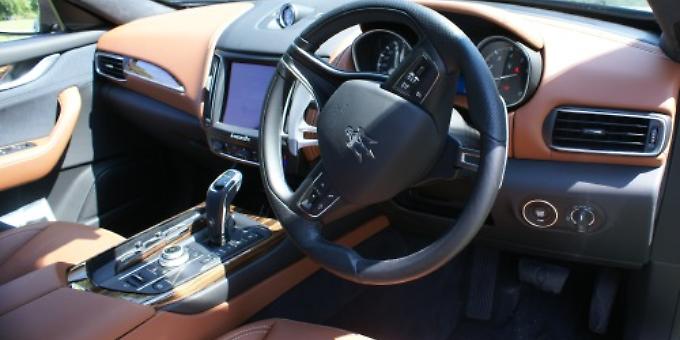 THERE is hope yet for those of us that appreciate what was once called a “real motor car”.

That might sound a bit sad to a new generation of drivers that know nothing but nippy hatchbacks and all-electric vehicles.

There’s nothing intrinsically wrong with all-electric vehicles. But EVs have some way to go before they prove to be a totally satisfactory mode of transport.

On the satisfaction level for matching comfort and power the Maserati Levante GranLusso scored highly.

Of course, the magic is already there in the name. Maserati has a kudos that no online accessed new car brand can hope to match.

What do you expect from a car that costs £81,680, you might ask? (That was the total cost of the test car: the basic price was £69,610). However, in my experience the more expensive the car does not necessarily make for a satisfactory drive.

Yet it is the DNA of “old school” values and traditions in auto manufacture, call it what you will, that makes the Maserati Levante GranLusso a valid proposition. I have just read a book that said the most important aspect of posting videos on Instagram was always to be mindful of quality. Quality of production (of your video), said the book’s author, was the cornerstone to posting stories and videos.

Make no mistake about it, in the 21st Century quality is also key in car manufacture, whatever price the product.

Just as you will be found out on social media if you do not produce quality posts, so too, carmakers will be found out if they produce rubbish cars. Maserati is a proud and quality marque. The Italian luxury vehicle manufacturer was established on December 1, 1914 in Bologna, and has been making cars ever since.

Proof of Maserati’s staying power lies in the fact that the Levante SUV I have been driving was introduced a century later in 2014.

The Italian carmaker has produced some fabulous models, the Seventies’ Maserati Ghibli SS 4.9 Coupe is a fine example.

Producing an sport utility vehicle (SUV) is a long way to come from that supercar. However, the SUV is the model of the moment. Just about every carmaker is producing a range now. First of all, there is the power that drives the Levante an aspect of the car’s attraction that is paramount.

It lends the Levante its overall character. Available is a re-engineered 3.8-litre Twin Turbo V8, the most powerful Maserati engine around today.This engine has evolved from the power unit fitted in Maserati’s flagship Quattroporte GTS.

It maintains the same 3.8-litre capacity but has been upgraded to deliver higher power output, from 550hp in the Levante GTS to 590hp in the Levante Trofeo. The Twin Turbo V8 has been developed in cooperation with Ferrari. This Maserati engine is Modena’s most powerful V8 ever and second only to the V12 that was fitted in the road legal version of the Maserati MC12.

So what you get here is an SUV with performance figures comparable to those of modern-day supercars.

It takes 4.2 seconds for the Levante GTS to accelerate from 0-62mph while the Levante Trofeo needs only 3.9 seconds for the same sprint. Top speed is 181mph and 188mph respectively. Also available is a 350hp to 430hp 3.0-litre Twin Turbo V6 that offers “an outstanding driving experience with low fuel consumption” and a 275hp 3.0-litre V6 turbodiesel.

To maintain that distinctive “Maserati” sound, two sound actuators, fitted near the exhaust tailpipes, accentuate the engine’s most tones and adjust them depending on the way the car is being driven.

In Sport driving mode, the sound becomes more resonant “just the soundtrack you would expect from a Maserati”, says the carmaker.

The Maserati Q4 Intelligent All-Wheel-Drive System has been developed to deliver a typical Maserati rear-wheel drive experience, even in low-grip road conditions. It acts on demand by transferring traction to the front wheels with an immediate response.

In normal driving conditions, the Q4 provides 100 per cent of the engine’s torque (pulling power) to the rear wheels. On slippery or loose road surfaces, or in the event of loss of traction at the rear, the system transfers the necessary torque to the front wheels.

The Levante has as standard Air Spring suspension. This contributes to the overall luxury feel of the car. Inside you feel a sense of calm and comfort that outweighs any need to power up at any opportunity. If you need the power then it is there. I felt the benefit of a more than willing engine to overtake or drive at a steady quick pace on motorways.

The interior design of the Levante is focused either on luxury or sportiness, respectively in the GranLusso and GranSport trims.

The cabin has more than enough space not to feel at all hemmed in. This is matched by a state-of-the art infotainment system, and materials such as the newly introduced full-grain Pieno Fiore natural leather.