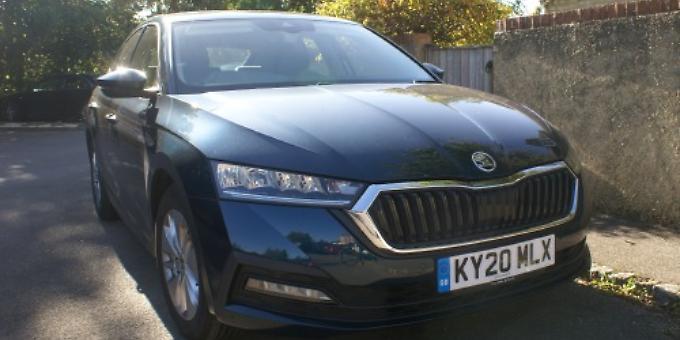 The clue to what this week’s drive was all about was in its name— the Škoda Octavia SE Technology Hatch.

There was a time when technology was a new word added to the lexicon of modern usage. Now new technology enhances the widest range of things from mobile phones to TVs, computers and cars.

This new fourth-generation Škoda Octavia offers more technology than ever before. However, despite going large on technology, Škoda retains a sense of humour.

The Czech carmaker, which has enjoyed unprecedented success in Britain, understands the British obsession with the weather.

We Brits can’t help it. We follow weather reports with the same sense of wonder that we have felt all our lives. Yet we remain unprepared for what Mother Nature is going to offer up next.

Škoda is keen to provide simple things that are very handy (another trait us Brits appreciate).

Nestled among the new technology swirling around the Octavia Technology Hatch is an umbrella. “Umbrella in door” is listed as standard specification on all SE Technology models. I find that rather cheering.

For the technologically minded, this Octavia has a lot to offer as well as the fetching Petrol Blue metallic colour of the test car, which has along with Crystal Black and Titan Blue been newly added to the range of paint finishes.

It is 19mm longer than its predecessor. New headlights feature LED technology for low beam, high beam and daytime running lights as standard. The tail-lights, brake lights and fog lights make use of LED technology as well.

There is a new two-spoke steering wheel, which can be heated as an option. It comes with new control buttons and knurled scroll wheels, allowing drivers to operate a total of 14 different functions without removing their hands.

The redesigned modular dashboard has been arranged in different levels featuring a large, free-standing central display.

LED ambient lighting indirectly illuminates the front doors, dashboard and footwells. The driver can choose up to 30 colours and can assign a different colour to the dashboard and front doors than to the footwell. The optional head-up display is another first for a Škoda. It projects important information such as speed, navigation and detected traffic signs directly on to the windscreen.

The optional keyless entry and start / stop allows any one of the car’s four doors to be opened first. Tri-zone Climatronic also makes its debut in the Octavia as part of the Winter pack option.

The new Octavia range launches in the UK with three engine options with power outputs ranging from 115PS to 150PS. The petrol option is a 1.5 TSI 150PS, which powered the car I have been driving. I really like these TSI petrol engines, which I find very economical and surprisingly powerful. The entry-level diesel offering is a 2.0 TDI unit. Some of the petrol engines are now equipped with mild hybrid technology while the diesel engines emit up to 80 per cent less nitrogen oxide.

The Octavia offers a choice of three infotainment systems with screens measuring from 8.25ins to 10ins. Some can be operated using gesture control or by voice via the Laura Škoda Digital Assistant.

The top-of-the-range Columbus infotainment system can display the navigation system’s maps in a different level of zoom than the 10.25-inch Virtual Cockpit.

The Octavia is always online thanks to a built-in eSIM, enabling access to the latest Škoda Connect mobile online services. These include eCall, a comprehensive remote vehicle access and infotainment apps backed by online data. The car features up to five USB-C ports (standard from SE First Edition upwards) for charging or connecting media devices and USB sticks.

The new fourth-generation Octavia range is set to expand again with the addition of a new, highly efficient 1.0 e-TEC engine. The new unit, which is equipped with a seven speed DSG gearbox as standard is the brand’s first mHEV or mild hybrid powertrain and is available in two trim variants from £23,005.

At the heart of the e-TEC powertrain is a powerful 48-volt Li-ion battery and a combined belt-driven starter-alternator. The 48-volt system means that the new Octavia can coast with the engine completely switched off for extended periods, with the electric motor maintaining power to essential systems like the car’s power steering.