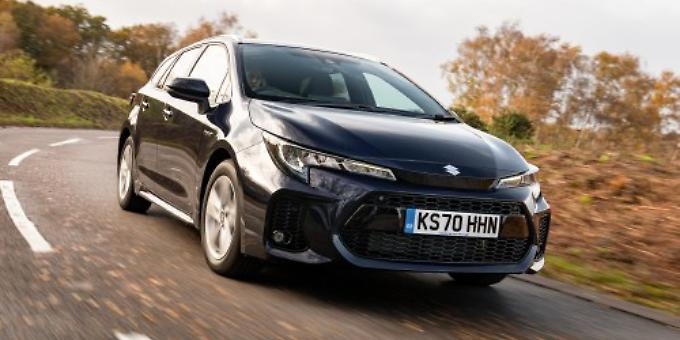 A NEW car model is something of a rarity these days so when one comes along it is bound to attract interest.

The Suzuki Swace, this week’s drive, arrives on the scene with an odd-sounding name and looks that indicate a breakaway from anything “Suzuki” in the past.

For a start this Suzuki appears large — outsized even — compared with any Suzuki I have known. The Swace generates a feeling of ethereal-like space inside and out.

However, there is an explanation for this. The Swace is based on another successful model, the Toyota Corolla Hybrid Estate. The Swace is made in the UK and is supplied to Suzuki by Toyota under a business agreement between the two carmakers.

So in a way we have seen this model before, even though the Swace is adorned with Suzuki branding.

I have to say whatever this car is called or whatever its antecedents, I liked its quite bearable lightness of being.

The Swace, with its hybrid mixture of fuel and battery power, positively floated along. Of course, this is the trademark of any Toyota — that all-encompassing feeling of ease and serenity at the wheel, the driving equivalent of easy-listening music.

Which is not to everyone’s taste. But when driving today can involve a degree of stress — mainly due to density of traffic and other road-users — the calming disposition of the Swace is welcome.

Designed with a low centre of gravity, the car has a wide stance, and what Suzuki describes as a sporty front face with sharp bi-beam LED headlamps (SZ5 models).

A sculpted rear door and 16in alloy wheels further enhances this sporty look.

The inside is Tardis-like, with great space for driver and passengers and a capacious load-carrying area that would do any estate car proud.

The rear, carpeted floorboard can be placed in a lower position to store taller objects. It is also reversible with a resin back that can be used for stowing wet or dirty items.

The compartment can be expanded into a flat space. This is achieved by using a remote lever to fold down the second-row seats, creating up to 1,606 litres of luggage space. Performance is interesting in as much as the “floating” sensation is supplied by the Swace’s hybrid system.

This combines a powerful electric motor with a 1.8 litre petrol engine exclusively designed for hybrid system use.

This delivers the easy driving sensation with good acceleration and fuel economy combined with low emissions.

The Swace is equipped with an EV drive mode function. In EV drive mode, the vehicle is driven solely by its electric motor with power supplied from the battery.

Suzuki says this mode can be used for driving short distances without having to worry about noise or emissions, especially in residential areas early in the morning and late at night, or in garages. The Swace’s smooth driving ability and stable handling is due to its low centre of gravity design and tuned suspension.

The low bonnet line and location of the hybrid battery beneath the rear seats help give the car stability, reducing body roll around corners, and contributing to a smoother ride.

The drive mode select function allows the driver to adjust the vehicle’s performance to suit driving conditions. The Swace is equipped with three modes: Normal, ECO or Sport.

If the vehicle becomes involved in a traffic accident, the eCall system alerts emergency services with a phone message that includes the vehicle’s location. The message is generated automatically when in-vehicle sensors detect a crash and can also be sent manually by the driver or any passenger with the press of a button.