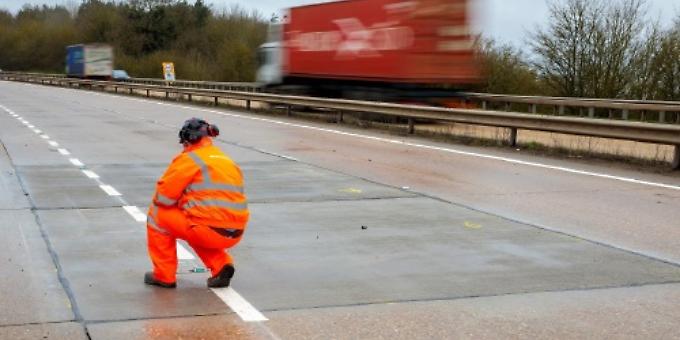 HIGHWAYS England is to spend £285 million over the next five years upgrading the concrete surface of roads across the country.

Concrete roads account for almost 400 miles of England’s motorway and major A-road network — around four per cent of the 10,000-mile total.

They were built largely in the Sixties and Seventies, when traffic volumes were half of what they are today.

Between now and 2025, Highways England will work with leading engineering and construction companies on a long-term programme to repair or replace the concrete surfaces of the country’s motorways and major A-roads.

The agency’s regional director, Martin Fellows, said: “Concrete roads have served the country well since they were first built half a century ago.

“They have proved tough and durable over the years, helping every day for work journeys and home deliveries, visits to friends and family, holidays, and the movement of the goods and services that we all depend on.

“This is the biggest concrete road renewals programme we have ever embarked on and we are pleased to have awarded the final two contracts that will help us deliver the maximum benefits of safe, reliable and smooth journeys for many years to come.”

Two contracts worth a total of £285 million were confirmed last week, with £218 million being spent on reconstruction works and £67 million on lifecycle extension works.

In total, the Government has announced that up to £400 million will be invested in the upgrade programme over the next five years.

“This huge renewals programme, which is part of our £27 billion investment in the country’s roads, will help ensure the nation’s road network is fit for the future.”

Electric Kia shows us the future

TODAY we take a look into the future with a model that signals one major carmaker’s significant ... [more]

Meet Kia’s most hi-tech SUV yet

ANY athlete knows that to compete at the top you need to achieve the highest level of ... [more]

THIS week’s drive comes with great style but also with great substance, having by the end of last ... [more]

How I coped with losing my schizophrenic son

Assistant Accountant We’re looking for a pro-active, part or fully qualified accountant who is accurate, process ...