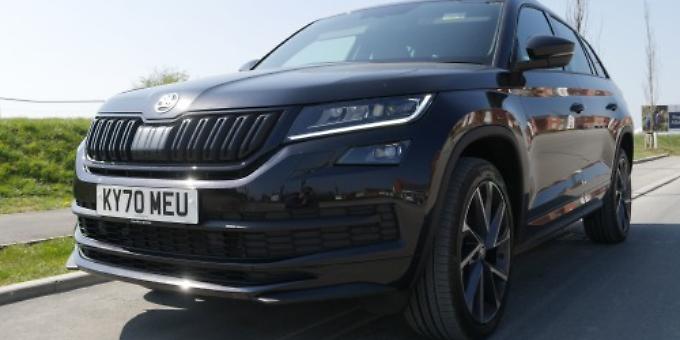 THIS week’s drive comes with great style but also with great substance, having by the end of last year sold more than 600,000 cars worldwide.

The demand for the Škoda Kodiaq SUV has been so great that it is being produced in China, India and Russia as well as at the Czech carmaker’s domestic plant in Kvasiny. In all, the Kodiaq is sold in around 60 markets across the globe.

This is success by any standard — and after driving the Škoda Kodiaq SportLine SUV this week I can see why it has come about.

Who says size doesn’t matter? Certainly when it comes to a sport utility vehicle (SUV) such as the Kodiaq, I think it still does.

This is motoring on a grand scale, right down to the engine in the Kodiaq Sportline — a powerful 2.0 TDI 200PS.

The Kodiaq marked the beginning of the Czech brand’s global SUV campaign in 2016, with the carmaker’s SUV family currently totalling eight members.

Historically, the Trekka was an early forerunner and the Yeti paved the way for the SUV era in 2009.

Now on top of this ongoing success for the Kodiaq an updated model will be available from July.

Škoda Auto CEO Thomas Schäfer said: “We have further refined the specification of the Kodiaq, offering even more safety and comfort with new features, such as full LED Matrix headlights and ergonomic seats.”

Schäfer added that the merits of the Kodiaq were excellent value for money, ample space and a comprehensive range of equipment.

This backs up the mantra I have been expounding over the years about Škodas in general and, in this case, the Kodiaq itself. The brand is certainly one to be reckoned with.

On price for example, you could easily pay double and more for another make of SUV and still get roughly the same refinement and similar specification. The test car came in at £40,445.

For this Kodiaq SportLine the standard equipment specification was huge. The only optional extra fitted to the test car was a temporary steel space saver wheel that cost £150.

For a large vehicle, this Sport version did not hang about. The figures were 0-62mph in 7.8 seconds and a top speed of 131mph.

Not that this car was about speed, but its agility, its road holding and comfort coupled with such performance added up to a satisfying drive.

The Kodiaq comes with a choice of four engines — one petrol and three diesel.

Power outputs range from 150PS to 240PS, with a choice between two or four-wheel drive and manual or DSG transmissions.

The Kodiaq SportLine is available with a pair of 2.0-litre diesel engines with outputs of 150PS and 190PS. The former is available with the choice of manual or DSG transmissions while the 190PS unit is DSG only.

Adaptive Dynamic Chassis Control (DCC) is available as an option for drivers wanting complete control over the driving characteristics and electronically regulated dampers can be set to one of three modes, Comfort, Normal and Sport.

Among the features exclusive to the SportLine are a colour multifunction trip computer and an electrically adjustable driver’s seat.

The Kodiaq SportLine also has a series of “Simply Clever” features designed to make life on board easier. These include a door-edge protection system that deploys automatically when opening the door. When shutting the door, the trim folds itself back in.

In total, more than 30 Simply Clever features have been integrated into the Kodiaq.

It is not difficult to see why the Kodiaq has become such a global big seller for Škoda.

The price is right, certainly, but also the equipment levels — especially on the Sportline model — are exemplary.

Electric Kia shows us the future

TODAY we take a look into the future with a model that signals one major carmaker’s significant ... [more]

Meet Kia’s most hi-tech SUV yet

ANY athlete knows that to compete at the top you need to achieve the highest level of ... [more]

THIS week’s drive comes with great style but also with great substance, having by the end of last ... [more]

How I coped with losing my schizophrenic son

Assistant Accountant We’re looking for a pro-active, part or fully qualified accountant who is accurate, process ...