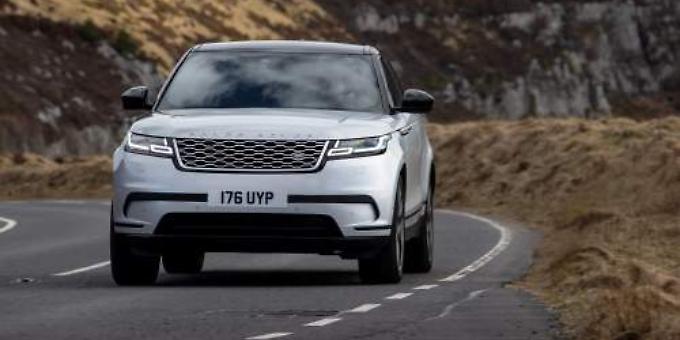 THE Range Rover needs no introduction, yet in 2021 this titan of British motoring is headed in a new direction.

The Range Rover still represents British car manufacturing, though the Indian company Tata Motors owns Jaguar Land Rover, which is one of its great attractions and strengths.

But like luxury sport utility vehicles the world over, cars the size of the Range Rover have been experiencing difficult times.

A higher road tax, fuel sources that have been critically challenged, the Range Rover — like other premium brands — has had to change.

And this week’s drive, the silky smooth Range Rover Velar, is a good example of how Jaguar Land Rover is moving with the times.

The carmaker puts it this way: “The new Range Rover Velar features pioneering new technology and hybrid electrification, continuing Range Rover’s 50-year history of innovation.” In style terms, the 2021 model Velar I have been driving is obviously a Range Rover but with sleeker design lines.

The name Velar had previously been used in 1969 for pre-production first-generation Range Rovers.

And looking back at the Velar’s short history — the model was launched in 2017 — there have been a variety of engine options: from 2.0-litre petrol through 3.0-litre V6 turbo-diesel to a 5.0-litre supercharged petrol V8.

Now comes an engine more tenable in a rapidly changing global world of cars — a 2.0-litre PHEV. This is a plug-in hybrid car that combines battery power with a conventionally powered internal combustion engine.

These are popular among British motorists. According to official figures sales of plug-in hybrid cars shot up in 2020, showing a 91 per cent increase on the previous year.

Carmakers today are facing a huge challenge as we approach 2030, when all new car sales of conventional petrol- and diesel-powered cars will be banned.

The Range Rover Velar test car, although a hybrid, was all-wheel drive and powerful — its two-litre 404 HP petrol engine producing plenty of torque (pulling power), which is what one expects from a Range Rover.

The hybrid technology is such that it balances power output of the engine between electric and fuel power.

So on a long run from my home in Gloucestershire to Forest Gate in east London, where we experienced every kind of traffic condition, fuel consumption was impressive.

With any PHEV, to get the best of both worlds — fuel and battery power — I found you need to keep the battery charged as much as possible.

In the Velar’s case, such is the exemplary power technology, you can leave the rest to the car.

On the run into London, I got the best out of the car’s power source both with fuel and electric. And on the return journey, when the battery needed a top-up, fuel consumption was still good for a big car but it was more of a “conventional” drive using fuel power.

When I put my foot down in the Velar, or slipped the engine into Sport mode, the fuel economy was naturally challenged.

There is a kind of majesty about these big Range Rovers which is totally irresistible.

It was quite extraordinary how much less tired I felt driving this car than others I have used for the same journey.

And that is another attraction of the Range Rover Velar — the levels of comfort are exemplary. I liked the Dapple Grey premium textile and Light Oyster suedecloth interior.

It was a big car to handle and this might deter some people, as might the price tag. Make no mistake, you get this luxurious rite of passage but you pay for it.

The new Velar is priced from £46,110 but everything about it strives for excellence. The test car cost £61,770 (on the road) with a standard specification that was comprehensive. When you add optional extras including, for example, 14-way heated, driver memory front seats with heated rear seats and rear power recline (£510), a Dynamic Handling Pack that includes Electronic Air Suspension (£1,755), the price rises gracefully to more than £70,000.

The Velar bristled with new technology: there is Active Road Noise Cancellation, intelligent technology that works like a pair of noise cancellation headphones, monitoring vibrations from the road surface and calculating the opposite phase sound wave needed to remove the noise heard by occupants in the car.

Pivi is designed around ease of use, with a simple interface that reduces the number of interactions to enhance safety. New graphics and super-fast responsiveness are enabled with a new electrical architecture under the surface, ensuring the screens and navigation system are ready to go in seconds, thanks also to a dedicated power source.

Owners can access software updates “over the air”, thereby reducing the need to visit a dealership. An embedded data connection means customers have access to the latest maps, apps and vehicle software modules with updates scheduled via the touchscreen at a time to suit them.

Streaming music and media has never been simpler. Spotify is integrated directly within the infotainment menu for the first time, with data included, while there’s Bluetooth connectivity for two phones at once.

A new family of 3.0-litre straight-six Ingenium engines is also introduced to the Range Rover Velar for the first time. The latest generation of smooth and efficient petrol and diesel engines are available with 48-volt mild hybrid electric vehicle (MHEV) technology for reduced fuel consumption.

The new Range Rover Velar with the test car’s new PHEV power shows fans of this great marque that it is preparing wisely for an uncertain future.