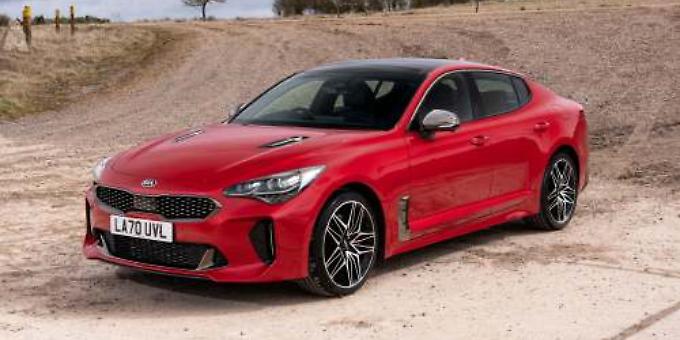 I HAD to pinch myself to check I was not dreaming when I sat behind the wheel of this week’s drive, the Kia Stinger.

It seems extraordinary that a carmaker today can come up with a car as appealing as the new Stinger.

The car may not be to everyone’s taste but to me the Stinger is the touring GT (gran turismo) car reincarnated, which is exactly what it is supposed to be.

The modern age of car production is now firmly locked on to making electric vehicles (EVs) and self-driving or autonomous models.

While that may be good for the environment, the Kia Stinger packs an old-fashioned punch that wafts in like a breath of fresh air.

The car I have been driving shot supercar-like from 0-62mph in 4.7 seconds and would kick on to a top speed of 167mph if you had the opportunity.

But mind-boggling speed is not what the Stinger is all about — more of which in a moment.

It really looks the part: there are classic gran turismo proportions to the Stinger with its long bonnet, short front overhang, long wheelbase and rear overhang.

This car with its super speed and guttural power would cost you a fraction of the price of a supercar (the price of the test car was £43,330 on the road).

The beauty of owning such a car in 2021 is that although it is in its design rooted in the DNA of grand touring cars of old, it possesses all the technological attributes of 21st century driving.

The Stinger evolved from the Kia GT Concept revealed at the 2011 Frankfurt Motor Show. It was very well received but many wondered if Kia would ever be bold enough to make a production model.

Well, the carmaker did, and the Stinger made its debut in 2017 with updates being introduced in 2021.

The Stinger was originally designed in Frankfurt under the watchful eye of Kia’s European head of design, Gregory Guillaume.

Guillaume insists this car is not about being a “hard-edged” sports car. The idea — as was the beauty of gran turismo cars — is that the real pleasure came from the joy of travelling in the car.

As a child growing up in Seventies France, Guillaume saw these types of cars wafting their occupants from Paris to glamorous locations.

He drew elegant grand tourers, hoping that one day they might become a reality. They were his inspiration for the Stinger.

A single high-specification car is available here, with a twin-turbocharged V6 direct-injection engine mated to an eight-speed automatic gearbox. Comfort is another big part of the Stinger appeal. Inside, changes include a metallic finish to sections of the steering wheel and a chrome bezel around the instrument cluster.

A new mood lighting system allows drivers to select one of 64 colours to subtly alter the character of the cabin.

To aid the driver there is a 7.0in LCD Thin Film Transistor (TFT) supervision cluster and a fully customisable head-up display which allows key information — speed, navigation instructions and audio, cruise control and blind spot detection information — to be projected onto the windscreen. There is also a 360-degree around-view monitor.

The Stinger’s luxurious interior has space for five people and their luggage. Occupants slip down into their Nappa leather low-slung seats.

I really take heart that Kia describes the Stinger as one of the most adventurous models in the company’s history.

Who would have thought that a South Korean carmaker that produces cars at the cutting edge of mass car production today would come up with such a gem as the Stinger? I’m really glad they did.