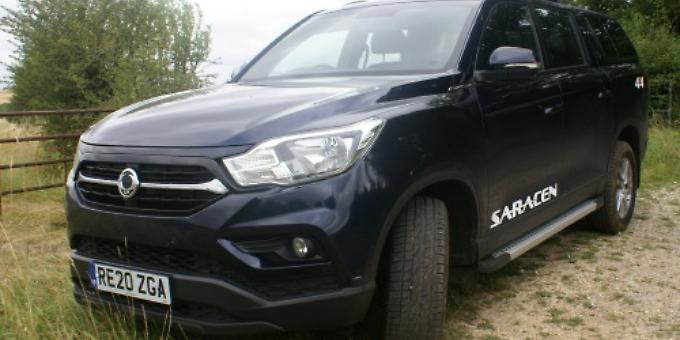 THIS week’s drive, the almost impossibly named SsangYong Musso Saracen pick-up, proved that all that agonising over size and spec when buying a new car could prove vital for your needs.

Certainly, in this instance, the Musso Saracen pick-up proved to be a lifesaver when it came to transporting four adults and a baby (plus copious baby paraphernalia) during two substantial road trips.

I am not saying that everyone needs to drive a large pick-up all of the time, but having the right vehicle for the job in hand can pay dividends.

So often during this summer holiday season you see overloaded vehicles on our motorways sagging under the weight of suitcases and other holiday gear.

In the past I have been there myself: a carful of children and luggage heading for the continent. Happy days!

But it also turned out that the SsangYong Musso Saracen pick-up was a much better mode of transport than I was initially prepared to give it credit for.

This vehicle by the South Korean carmaker was one of the largest pick-ups that I have experienced on European roads.

I was drawn to it because the Musso was voted best pick-up in Diesel Car magazine’s Car of the Year 2021 Top 50 Awards for the third consecutive year. So obviously this pick-up is making an impact here in the UK.

Diesel Car’s judging panel, noted: “The Musso is a highly capable pick-up, with a towing capacity of up to 3,500kg and an impressive load bed. Not only that, but it costs from just under £27,000 in entry-level EX trim and gets the backing of a seven-year/150,000-mile warranty.”

The magazine said the vehicle was easy to drive and could return over 30 miles per gallon on a longer run.

Our two substantial trips in the Musso Saracen pick-up from the Cotswolds took in a long motorway drive across southern England and another later trip to East London and back.

On both trips the Musso Saracen pick-up proved to be economical, comfortable and a pleasure to drive with all four adults present and baby none the worse for wear after some substantial miles and at times heavy traffic conditions.

The Musso’s satnav was also blissfully simple to use, which is not the case on many new cars that prove overcomplicated.

I do think it is a boon for drivers of these large pick-ups to have an automatic gearbox. I would have to think hard if I was considering buying one or any other large SUV (sport utility vehicle) with a manual gearbox.

The handling of the Musso Saracen pick-up was fine but you do not want the added physical demands of a manual gearbox while hauling through long queues of traffic like those we experienced on the M25 en route for East London.

The Musso is powered by the e-XDi220 engine found in the SsangYong Rexton, which delivers a lot of torque (pulling power). This creates maximum power of 181PS and a maximum torque of 400Nm at 1,600 to 2,600 rpm.

It is available with either a six-speed manual or an Aisin six-speed automatic gearbox, with its success proven by SsangYong and several other automotive brands.

Inside, the Musso is well equipped and offers good shoulder and leg room front and rear. Nappa leather seats can be found on the top of the range model for added luxury and comfort.

DAB radio and Bluetooth connectivity feature across the range, while all but the entry level model feature a state-of-the-art infotainment system that includes an eight-inch screen, Apple CarPlay, Android Auto and Wi-fi mirroring, or 9.2-inch screen with TomTom navigation on top line models.

SsangYong is backing its faith in the new Musso by introducing a sector-leading seven-year/150,000 mile warranty, which will also apply to the Rexton, on which the Musso is based.

I did not have to tow anything while driving the Musso Saracen pick-up but its high strength chassis and ultra-rigid body have enabled it to achieve best-in-class credentials for towing and carrying.

SsangYong says it is committed to refreshing its entire product portfolio, and Musso is the latest new model to come from the brand in a programme of new introductions throughout the coming decade.

WITH the manufacture of electric vehicles hotting up around the world, Nissan could be forgiven for ... [more]

THE average cost of car insurance has fallen by almost £100 to its lowest level in seven years, ... [more]

THE triumph of Toyota is encapsulated in its 2021 model line-up, which shows a global carmaker ... [more]