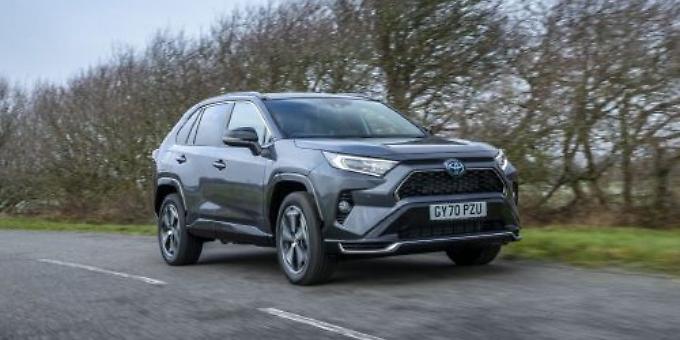 THE triumph of Toyota is encapsulated in its 2021 model line-up, which shows a global carmaker having adapted well to the fast-changing world of 21st century motoring.

The line-up is awash with hybrids and plug-in hybrids and even includes the second-generation Mirai Hydrogen Fuel Cell model, a car that recently set a world record 845-mile zero-emission journey.

Having spent some time with this week’s drive, the Toyota RAV4 Plug-in Hybrid, I am fast becoming a fan of the super simplicity of Toyota’s new-age cars.

Comfort is there in abundance in the RAV4, so is the ease of handling of a car that is designed to make your everyday driving life smoothly efficient.

Once upon a time motoring journalists would have found this kind of driving bland and “uninvolving”.

But I think we have all moved on from that cast of mind. With millions of cars populating our roads, it is important above all to be safe — but also driving has to be super-functional.

I have a friend, a young driver in his thirties, who recently bought a car with an automatic transmission.

When I was young, driving an automatic was considered the preoccupation of older drivers who had long ago lost any interest in motoring.

My young friend believes the automatic transmission is a godsend today not only on long motorway journeys but also in the stop-start world of traffic jams that plague modern driving.

The Toyota RAV4 Plug-in Hybrid test car was an automatic with a flexible, pacy engine that is a higher output version of the 2.5-litre unit featured in the hybrid model plus improved torque (pulling power).

Performance is quite startling: maximum output for the full powertrain, including the 2.5-litre hybrid engine, is 302bhp/225 kW, which enables the car to achieve 0-62mph in six seconds.

Using its experience of engineering two generations of Prius Plug-in technology, Toyota has produced what is the most powerful model in the RAV4 range.

The RAV4 Plug-in delivers best-in-class performance in its segment in terms of EV driving range, CO2 emissions and fuel efficiency.

The exterior of this RAV4 has changed a lot over the years. It is classed as a crossover SUV (sport utility vehicle) and has been with us since 1994 when it was first launched in Japan and Europe.

I remember taking that early RAV4 off-road. It was a smaller vehicle than its 2021 counterpart but was also an automatic. I remember thinking how was this going to work — a small SUV going off-road and with automatic transmission? However, it was great fun and the RAV4 performed immaculately.

Fast-forward some three decades and the RAV4 is still a major contender in its sector. Especially, I found, in this plug-in hybrid guise.

It is also unique in its class in offering an authentic EV drive. In fact, EV mode is the default: the hybrid engine will not intervene, giving the driver the freedom to cover around 46 miles (75km, WLTP cycle) and achieve speeds (where permitted) of up to 84mph — suitable for motorway driving — with zero fuel consumption and zero tailpipe emissions.

And under City WLTP cycle driving, the EV range can reach more than 60 miles.

Depending of the battery state of charge (SOC), the vehicle will automatically switch to hybrid operation. This is a key benefit derived from basing the plug-in system on Toyota’s highly efficient hybrid technology.

The RAV4 Plug-in has four modes for its plug-in hybrid system.

It operates by default as an electric vehicle (EV), running in EV priority mode, and will continue to run purely on its electric power, even with hard use of the accelerator pedal.

When the limit of EV driving range is reached in EV mode, the vehicle automatically switches to Hybrid Vehicle (HV) mode.

The driver has the flexibility of using HV mode to start a journey, switching to EV driving to maximise efficiency when necessary — for example, when entering an urban area.

In Auto EV/HV mode, the hybrid system will automatically come into play when extra power is required, for example under sharp, sudden acceleration, with EV mode resuming immediately afterwards.

Battery charging mode helps restore the level of battery charge when the level is too low for EV operation, drawing power generated by the engine.

RAV4 Plug-in reinforces its all-wheel drive performance with Trail Mode, an automatic locking system for the limited-slip differential that the driver can engage using a centre ensures the best possible grip on slippery and loose surfaces and can help the driver negotiate more challenging off-road conditions.

For example, if one wheel loses contact with the ground, Trail Mode will brake the spinning wheel and direct drive torque to the grounded wheel to gain traction, while also automatically adjusting the throttle response and transmission shift pattern.

The RAV4 Plug-in Hybrid continues to be a revelation and a most satisfying drive.

THE Kia Rio is one of those small cars that should attract new car buyers simply because with each ... [more]

THE UK’s top 10 most dangerous regions for drivers in terms of accident numbers have been revealed ... [more]

SOARING fuel costs have led the RAC to call on retailers to play fair with drivers and cut the ... [more]

Director of Finance and Operations (DFO)

Applications are invited for the post of Director of Finance and Operations (DFO) at Rupert House. This is a ...

Features writer/senior sub-editor This is an attractive role for someone with newspaper reporting and subbing ...

Full-Time professional driver required must be well presented, with a clean full license for both automatic and manual ...